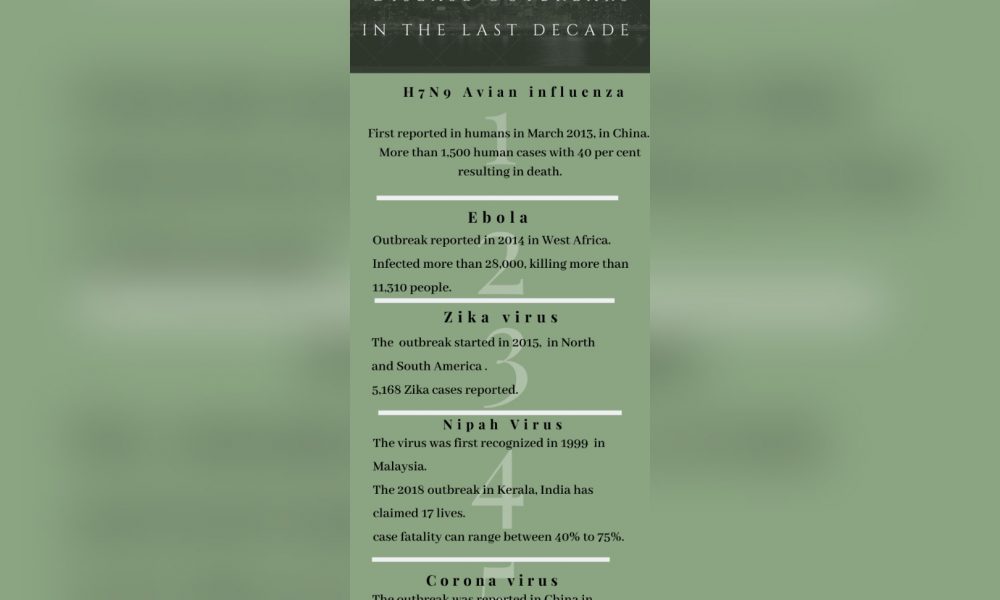 5 Disease outbreaks in the last decade

A subtype of influenza virus, Avian Influenza-A flu or H7N9 was found in the birds in the past which was not previously seen in either animals or people until 2013. The H7N9 virus infection was first reported in humans in March 2013, in China. Since then infections have been found in both humans and birds. At the end of the year, 144 cases had been reported of which 46 had died. The virus has seen five waves of epidemics since then resulting in more than 1,500 human cases, with approximate 40 per cent resulting in death. This virus does not appear to transmit easily from person to person, and sustained human-to-human transmission has not been reported.

Antigenic and genome sequencing suggests that H7N9 is sensitive to neuraminidase inhibitors, such as oseltamivir and zanamivir, though the effectiveness of oseltamivir is still questioned.

Ebola outbreak in West Africa had created international havoc in 2014. It has infected more than 28,000, killing more than 11,310 people. The first case was reported in December 2013. An 18-month-old boy from a small village in Guinea is believed to have been infected by bats. On March 23, 2014, with 49 confirmed cases and 29 deaths, the WHO officially declared an outbreak of EVD. By July 2014, the outbreak spread to the capitals of all three countries Guinea, Liberia and Sierra Leone. Throughout the epidemic, EVD spread to seven more countries: Italy, Mali, Nigeria, Senegal, Spain, the United Kingdom, and the United States. Later secondary infection, mainly in a healthcare setting, occurred in Italy, Mali, Nigeria, and the United States.

Two and a half years after the first case was discovered, the outbreak ended with more than 28,600 cases and 11,325 deaths. The rVSV-ZEBOV vaccine is safe and protective against only the Zaire ebolavirus species of Ebola virus.

Starting in 2015, North and South America experienced several large Zika virus outbreaks. This resulted in an increase in travel-associated cases in US states, widespread transmission in Puerto Rico and the US Virgin Islands, and limited local transmission in Florida and Texas.

In 2016, the nation reported 5,168 Zika cases, most of which involved U.S. travellers returning from foreign outbreak zones. Zika is spread mostly by the bite of an infected Aedes species mosquito (Ae. aegypti and Ae. albopictus). These mosquitoes bite during the day and night. There is no vaccine or medicine for Zika.

The first outbreak of Nipah virus (NiV), a zoonotic virus was recognized in 1999 during an outbreak among pig farmers in, Malaysia. Later it was recognized in Bangladesh, and nearly annual outbreaks have occurred in that country since 2001. The disease has also been identified periodically in eastern India.

The next outbreak of Nipah in India was in 2018 in Kerala. It claimed 17 lives and over 2,000 people in Kozhikode and Malappuram districts were quarantined and kept under observation during the period of the outbreak. Fruit bats of the Pteropodidae family are the natural host of Nipah virus and the case fatality can range between 40% to 75%.

Coronaviruses are enveloped non-segmented positive-sense RNA viruses belonging to the family Coronaviridae and the order Nidovirales and broadly distributed in humans and other mammals. The study also adds that Although most human coronavirus infections are mild, the epidemics of the two beta coronaviruses, severe acute respiratory syndrome coronavirus (SARS-CoV) and Middle East respiratory syndrome coronavirus (MERS-CoV), have caused more than 10 000 cumulative cases in the past two decades, with mortality rates of 10% for SARS-CoV and 37% for MERS-CoV. The coronavirus is adapting and mutating, which makes the virus spread faster and possibly more difficult to treat.

The coronavirus outbreak was reported in China in December 2019 and at present, the death toll has reached nearly 700. To date, there is no specific medicine recommended to prevent or treat the novel coronavirus.