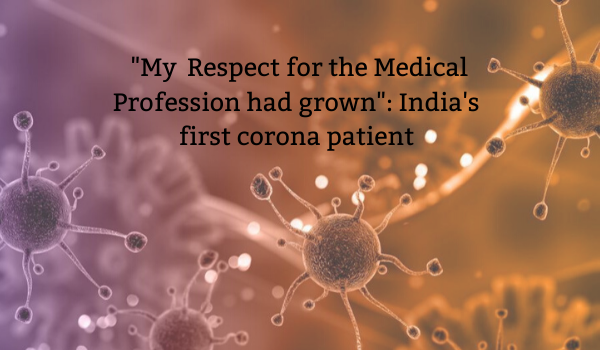 “My Respect for the Medical Profession had grown”: India’s first corona patient

Winning the battle against the coronavirus, the patient zero of India has come back to life. Recovering completely from the coronavirus, she said her respect for the medical profession had grown ever since she saw how selflessly the health professionals worked to save her life.
The 20-year-old was pursuing her third-year MBBS in China, where she picked up the virus at its epicentre in Wuhan. She told that fighting the virus had made her more positive and resolute.
“I am charged with positive energy now. I have seen people toil to save my life. I never felt I was alone in the isolation ward. Many prayed for me. My respect and passion for the medical profession have increased manifold now,” she added.
Even when she was suffering from the virus, never did she lose hope and was sure of bouncing back. Looking back, she recalls that she was lucky enough to have escaped China in time as soon as the lockdown began. She added that she managed to book a next-day flight to Kolkata.
But the authorities suspended all public transportations in Wuhan the same night and locked down the city. I, along with some of my friends, rushed to the railway station and managed to board the last train to reach the nearest airport,” she said.
She also added that she never thought that she could end up infected since she took all the precautions while travelling. She added that she developed a slight fever and throat infection and she immediately informed the medical authorities who were monitoring her and got herself admitted at the hospital.
From Jan 27th to Feb 20, she spent 24 days in the hospital wearing protective gear. She said that her knowledge of medical science helped her battle her fears.
“If the virus affects a healthy person it will not be a big problem, but for those with compromised immunity, the virus will be life-threatening. The mortality rate for coronavirus is just 2 per cent and it may not spread alarmingly in our climate,” she said.
When diagnosed positive, she was mainly concerned about her family members and others, who she had come in contact within the preceding two weeks.
Since she knew that the isolation wards to be the best way to prevent coronavirus from spreading, she says she wasn’t unnerved. She also praised the medical staff for their dedication and concern.
“I was allowed to make calls and that eased some pressure. I finished some books also. Once or twice, I was emotionally down but health inspector Sheebha and my counsellor Neethu Prabha boosted my confidence,” she recalls. She has resolved to pay back the state after completion of her studies by serving its people, who not only prayed for her long life but also worked hard for her recovery.
Meanwhile, South Korea has raised the alert level to red as the confirmed cases have neared to 800. The death toll till now is seven. In South Korea, red is the highest of four alert levels. Last activated during the H1N1 swine flu epidemic in 2009, the red alert level will allow the government to demand school closures, cancel mass events and set up a task force to take legal action to stop the virus from spreading.