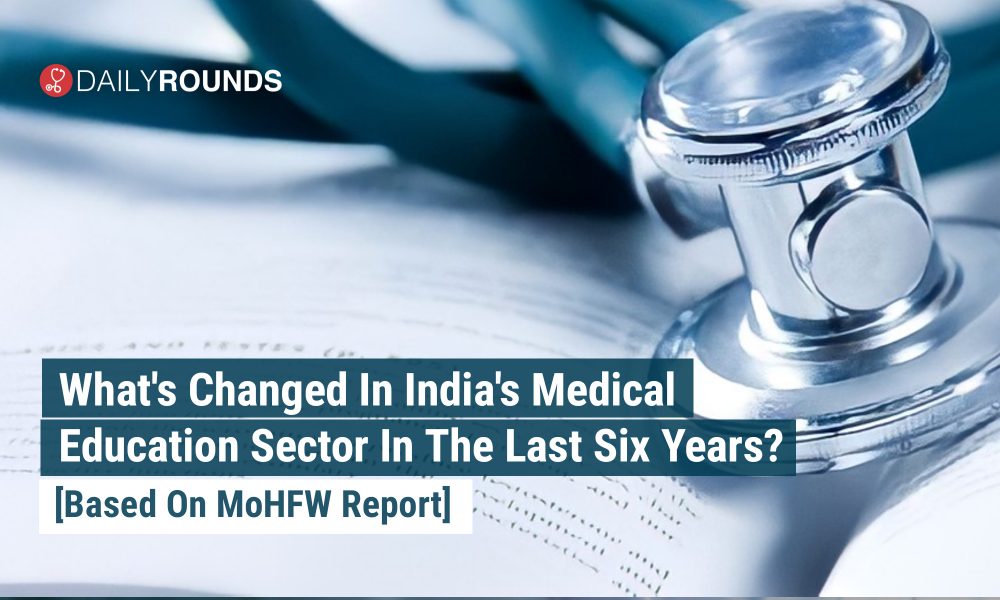 What’s Changed In India’s Medical Education Sector In The Last Six Years? [Based on MoHFW Report]

In order to increase transparency, professionalism, accountability, availability, distribution, merit-based admission, affordability, and quality of medical education, several reforms have been introduced by the Union Health Ministry over the last few years. The reforms include the introduction of NMC, an increase in the number of Doctors and Specialists and the introduction of One Country, one exam scheme, etc. Let’s look into it in detail.

One Country, One Exam:

One of the major reforms that the Union Health Ministry talks about in its report is the common entrance tests for Undergraduate and Postgraduate medical education. The centralized common entrance examination for admission to MBBS courses- the National Eligibility-cum-Entrance Test (NEET) has been introduced with the aim of ensuring a ‘one country, one examination, one merit’ system. The NMC is also proposing to introduce the National Exit Test (NEXT).

NEET allowed students from anywhere in India an opportunity to study in any medical colleges in the country based on merit, the report reads. On the other hand, NEXT, a common final year MBBS exam would not only serve as a licentiate exam for the practice but also serve as an entrance exam for admission to Postgraduate in broad speciality medical courses. Further, the same exam will serve as a screening test for foreign medical graduates.

The Health Ministry further talks about introducing common counseling at both Central and State levels to ensure transparency in the admission process. In fact, the Ministry pointed out that from 2021, the DNB counseling has been merged with MD/MS counseling for streamlining the admission process. Apart from all this, the Health Ministry report further mentions the promotion of Family Medicine as a specialized discipline, it points out how the NMC act provides for Community Health Providers (CHPs), and the introduction of the three-month District Residency Programme in the Post-graduation curriculum.

Availability of Doctors and Specialists:

In an attempt to ensure the availability of doctors and specialists in the country, there have been “concerted efforts over the last six years to increase the number of medical colleges,” mentions the report by the Health Ministry. The Health Ministry further mentions that for this, a Centrally Sponsored Scheme was launched back in 2014, and in the three phases of the scheme, the Centre has till now approved 157 medical colleges, out of which 47 colleges have already become functional and 110 are expected to be functional in the next few years.

Also, the National Board of Examinations (NBE), operative under the Health Ministry, aims to upscale the numbers of postgraduate medical seats. It also accredits the hospitals (mainly private hospitals) for broad specialty and super specialty courses that are equivalent to MD/MS or DM/MCh respectively. So far, NBE has accredited 704 hospitals with 9779 seats, 80% of which are in the private sector. “There has been a tremendous increase in Postgraduate seats brought about by the National Board of Examinations (NBE) over the last few years by rationalising the accreditation criteria,” claimed the Health Ministry.

In addition to all this, there has been a great extent of digitalization in the medical education sector over the last few years. The recent regulations by the NMC mandate all teaching spaces to be e-learning enabled and digitally linked to one another. Further, the pandemic has accelerated the use of digital technology in the medical learning space.

All these reforms which happened over the last few years are expected to have a long-term impact on not just the medical education field but also the entire healthcare system of the country.