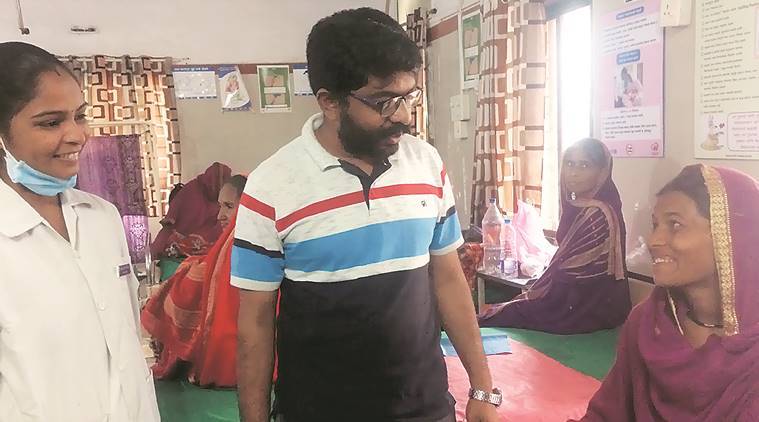 Meet the only doctor at Dhadgaon Rural Hospital, who is on duty for 24 hours, seven days a week.

Away from the hustles of crowded cities of Maharashtra, there exists a government hospital with only one doctor. Situated in Nandarbur, the northern tribal district of Maharashtra, the Dhadgaon Rural Hospital has only one doctor and ten Nurses. The only doctor left in the hospital, Dr Santhosh Parmar, MD in gynaecology manages everything in the hospital with the help of nurses. He is on duty for 24 hours, seven days a week.
Dr Parmar’s day starts at 8.30 am when he takes round in all wards. There are ten patients in the postnatal ward, two in the casualty department, three in the general ward and two due to deliver soon. After finishing his rounds at about 9.30 am, he visits the outpatient department, which gets crowded by the time he starts consulting.
Every day, 350 to 400 patients visit the 30-bedded hospital for fever, sickle cell, snake bites and cold. A dearth in doctors has forced patients to queue up and wait, sometimes for over six hours, for their turn. With the bodies of two children who died due to snake bite, Chetan Salve said he tried to push through the crowd but could not reach the doctor’s office. “Hundreds were waiting to see him. Finally, I called him on his mobile and waited till afternoon for the postmortems to be conducted,” said salve. By evening, he visits the nutrition rehabilitation centre that manages malnourished children.
Last Monday only, Dr Santosh Parmar managed to consult 483 patients, of which, 13 required hospitalisation. They included a person suffering from a snake bite, an epilepsy patient and a woman who underwent an abortion. He also delivered five babies and conducted autopsies on the bodies of two boys who died of snake bites.
“When the patient load gets unmanageable, I have to request doctors with Rashtriya Bal Swasthya Karyakram to help me,” Parmar said. This, in turn, means RBSK doctors would have to abandon their routine duty of field visits.
The Dhadgaon rural hospital caters 150 villages spread across hilly terrain, some as far as 30 km away. The hospital records 160 deliveries a month and Dr Parmar conducts most of them with the help of nurses. Initially, gynaecologists, paediatricians and anaesthetists showed interest. “But it fizzled out eventually,” said Dr Raghunath Bhoye, the Nandurbar civil surgeon. Since July 28, after multiple doctors resigned, Parmar has been managing everything alone.
Bhoye said he is aware of the issue. He said doctors are unwilling to work in remote tribal regions. “We had posted temporary doctors, but a month ago, the government released an advertisement for permanent postings. All doctors in our rural hospital quit to apply for that post,” he added. The hospital has only 10 beds in the gynaecology section, and the construction of 60-bed women and child hospital in Dhadgaon remains delayed. The hospital also does not have a permanent medical superintendent, a non-communicable disease doctor or a National Health Mission doctor.
Earlier, the dearth of specialist doctors in tribal regions had forced the government to announce lucrative packages, allowing private doctors to negotiate their salary as high as Rs 2 to 3 lakh per month. Officials say that state government had approached Indian Medical Association and various Gynaecology associations, but only a few doctors showed interest in coming to Nandarbur.