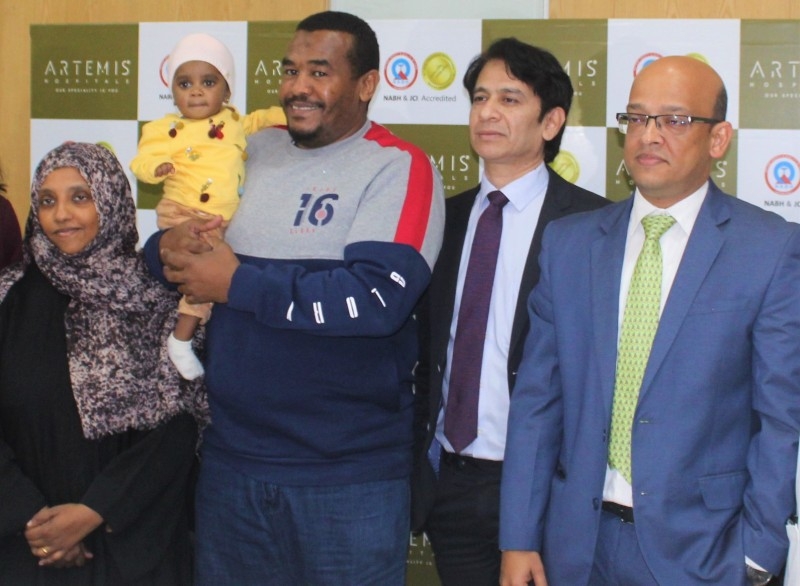 The Indian doctors could take pride in the Gurugram doctors who have saved the life of a baby girl in a rare surgery. The doctors have given ‘Noor’ a new lease of life by performing a liver transplant using a bovine jugular vein of a cow to provide blood circulation to the new liver.
Noor, now a one-year-old was suffering from a rare condition called biliary atresia. According to the doctors of Artemis hospital, who performed the surgery, the transplant procedure was extremely rare. Due to her liver problem, Noor was very weak when she arrived at the hospital. “She weighed around 5 kgs and 200 grams and was suffering from biliary atresia. Hoor had undergone an operation for the same in Saudi Arabia which was not successful and the local doctors then referred here,” Dr Giriraj Bora, Senior Consultant of Artemis Hospital said.
He also added that they had to undergo such a transplant as cadaver vein donation is not available in India. “Hoor’s vein was so small and cadaver vein was not available here. Later we explained to the baby’s family that bovine jugular vein(animal vein) would be used in the transplant and we took the consent for the same, to which they agreed,” Dr Bora said.
“This case is very rare as this is the first liver transplant in the world in which a cow’s vein has been used to transmit blood to the new liver. These veins have been sourced from foreign countries,” said Dr Ramdip Ray, Senior consultant of Artemis Hospital.
“Thanks to the doctors and hospital staff. We are satisfied with the doctors and the result,” said Hoor’s father.
Biliary atresia is a rare disease of the liver and bile ducts that occurs in infants. Overall survival with a native liver (not transplanted) ranges from 30-55 per cent at five years of age; and 30-40 per cent at ten years of age. When a baby has biliary atresia, bile flow from the liver to the gallbladder is blocked. This causes the bile to be trapped inside the liver, quickly causing damage and scarring of the liver cells (cirrhosis), and eventually liver failure.