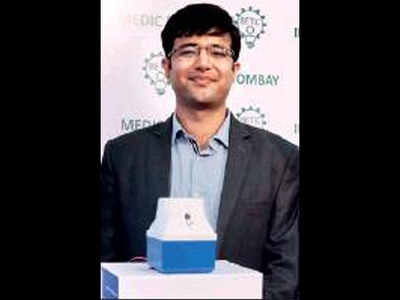 A new biomedical device can now measure the “tissue stiffness” and predict the patient’s risk of diabetic foot complications. The device has been introduced at an innovation camp at IIT-Bombay.
According to Nishant Kathpal, the 27-year-old innovator who won a Rs 50-lakh grant for his startup, this is possibly the first device that can measure tissue stiffness. It can thus predict whether a patient will develop ulcers that could lead to an infection that would need an amputation. The Diabetic foot scanner has been on for two years but got a licence for manufacturing on Tuesday. Fifteen other innovations are underway at the camp organised by the Biomedical Engineering and Technology (innovation) Centre (BETiC). As a next step, Kathpal’s diabetic device will undergo phase two trials at two city hospitals, S L Raheja in Mahim and MGM in Vashi, from the next week. He also added that they already received orders from research institutes and doctors.
“Developing a biomedical device in the West costs millions of dollars but the process is affordable in India,” said B Ravi, the head of BETiC. “Our five-year mandate was to help set up five startups but we have managed 15. We have filed 50 patents so far,” he added.
Former Atomic Energy Commission chairman Dr Anil Kakodkar, while unveiling the diabetic foot scanner said the centre has consistently managed to come up with innovations in a field where competition from foreign labs is intense.
Diabetic foot is one of the complications of diabetes. It results in almost two lakh patients undergoing amputation every year.