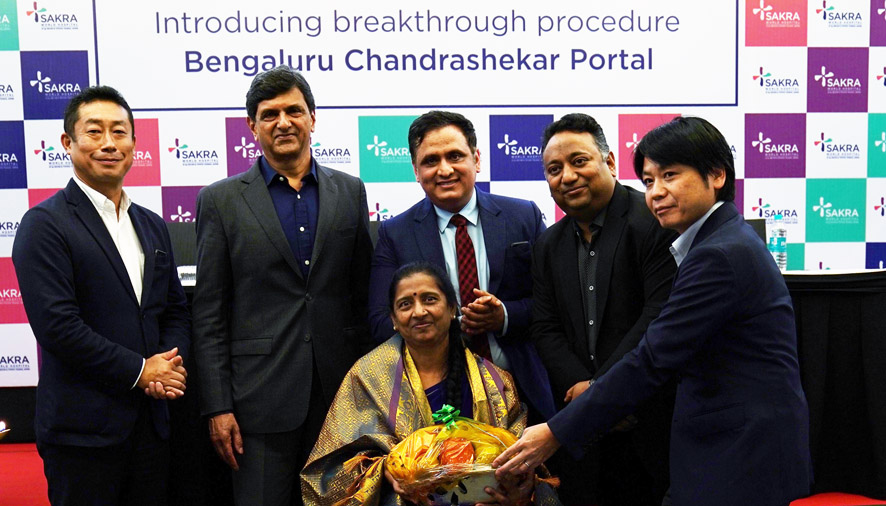 Medical surgeries have seen several advancements over the years. But, despite the medical and surgical advances in the field of knee surgery, the normal practice for fractures or tears in the ligament, calcification or filling of water, has been an open surgery. To overcome this, Bengaluru-based doctor Dr Chandrashekar P, Senior Consultant and head of department, Orthopaedics, at Sakra World Hospital along with his team devised a new keyhole technique for the outside or lateral collateral ligament (LCL) of the knee.

Clinically referred to as Direct Lateral Portal and also known as “Bengaluru Chandrashekhar Portal”, it is an extension of an arthroscopic surgery developed for the first time in the world to address the health problems occurring in the Outside or Lateral Collateral Ligament (LCL) of the knee. LCL is the two surrounding connective tissues that connect the knee bones, keeping it stable. The technique was conceptualized to prevent tearing of the ligaments during open surgery and was conducted on a cadaver study on both the knees at a cadaver lab and further dissected to know the safety of the portal. The process involves incision to reach the part in the outer ligaments of the knee without damaging the LCL fibres and peroneal nerve while making the portal. Cases of pathologies in the LCL are rare and occur in about one in 1,000 cases.

“The knee is made up of four ligaments, two of which are on the sides. The keyhole surgery is meant for the outer portion of the ligaments on either side of the knee. Keyhole includes making a small hole or puncture in the knee which serves as a portal or passage for arthroscopic surgery. This is better than open surgery as it means less pain, less scarring, faster mobility and recovery for the patient. Without the knowledge about the portals, it becomes difficult to reach to this particular area of the knee and joint. Patients can return to work, sports and office sooner than usual. We took two years to work on this and conduct research. It was recently reviewed and published by the Global Journal of Medical Research that serves as a knowledge-sharing purpose for medical fraternities globally. I name it so as I wanted to dedicate it to the people of Bengaluru and Karnataka,” said Dr Chandrasekhar.

“Not only the surgery improved my health significantly, but it also helped me regain my strength to move without any support. I would like to thank Dr Chandrashekhar for giving me a new lease of life,” said one of the patients.