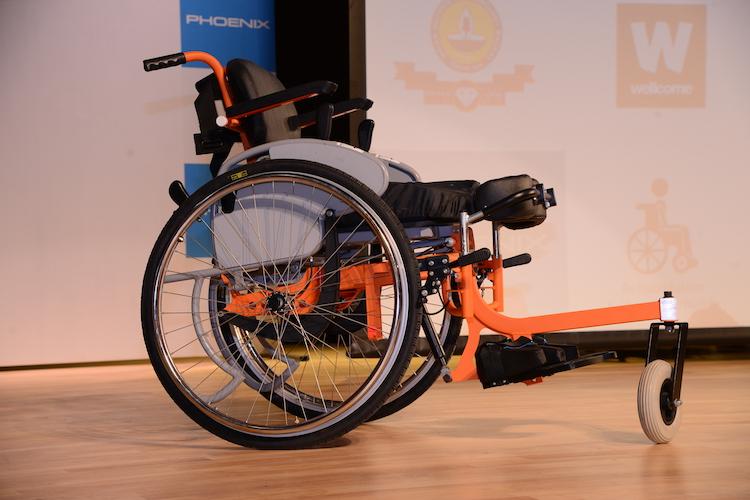 The Indian Institute of Technology(IIT) Madras, launched India’s first “indigenously designed” standing wheelchair which can enable a person with a disability to stand independently. The IIT has achieved this feat in collaboration with Phoenix Medical Systems.

Known as “Arise”, the apparatus was designed by the TTK Centre for Rehabilitation Research and Device Development(R2D2) under the guidance of Prof Sujatha Srinivasan from the Mechanical Engineering department of the college, who also happens to be the head of the Research Centre.

The wheelchair enables a differently-abled person requiring a wheelchair to shift from sitting to standing position, and vice versa, independently and in a controlled manner. It was launched at IIT Madras Research Park in the presence of Thaawarchand Gehlot, Union Minister for Social Justice and Empowerment and others.

The commercialisation of the wheelchair technology was made possible through support from Wellcome, UK, through an ‘Affordable Healthcare in India’ Award, which brought together the research and manufacturing partners.

“In the last five years, I have seen a lot of modern technologies in India and abroad but have not seen such a good standing wheelchair anywhere in the world,” said the minister. The user’s arm will enable them to function the wheelchair in the desired manner. The wheelchair will also help avoid health issues that could arise by constantly using a conventional wheelchair. “Using the wheelchair all the time can give secondary health problems like lowered blood circulation sore body and pressure sores. One needs to stand at least three times a week,” Sujatha Srinivasan said to The Times of India. The wheelchairs are set to hit the markets soo and will be available at the same price as a conventional wheelchair.

R2D2 has been involved in research related to human movement, the influence of orthotic and prosthetic devices on human movement, and the design and development of mechanisms, products, and assistive devices for people with impairments.