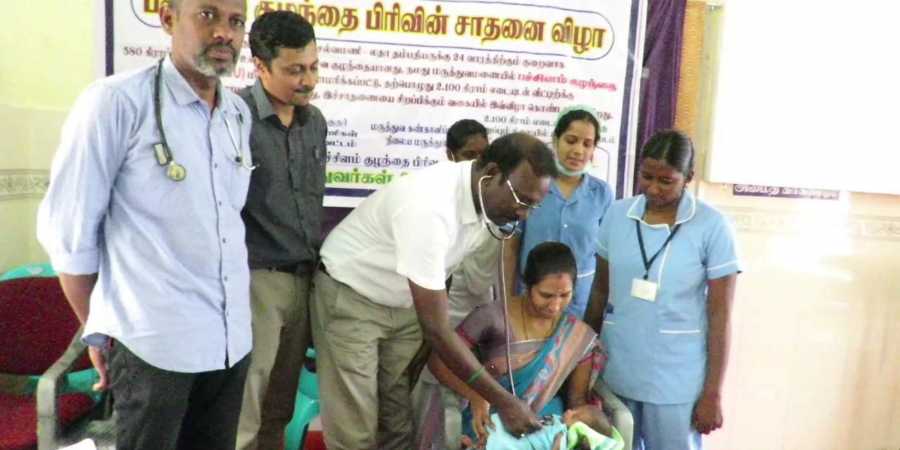 In what can be considered a miracle, a baby girl who was born just 580 gm has made a remarkable recovery. The baby girl, who was born five months ago was handed over to her parents at Nagapattinam General Hospital.
The baby, who was all bones and skin when born prematurely, and weighed just 580 gm is believed to be among the lightest babies ever born in India. It was Latha’s second child after her first pregnancy was aborted spontaneously a year ago. Latha said that she could not believe her eyes when nurses brought the infant to her in the labour ward of the Neonatal Intensive Care Unit (NICU) in the hospital in May.
“Not many gave my daughter a chance of survival. I was scared as I lost my first child before she could be delivered. I had some hope my second child would make it. I never left the hospital. Today, nothing can describe my happiness, that she survived and she will live healthily,” said Latha, wife of Selvamani, a fisherman from Samanathampettai, a village near Nagapattinam.
The child was born on May 10 as a premature baby. She was in her mother’s womb for under 23 weeks, instead of being delivered after nine months from the womb. Remaining 20 weeks in the hospital, the doctors and nurses treated her. The nurse called the child ‘Shivanya’ and doctors called her ‘Jhansi Rani’.
The child was not registered in the birth register for a few days as it was considered an expelled foetus delivered within the abortion period of 24 weeks. Doctors called the infant second-lightest child born in Tamil Nadu and third-lightest in India. “The baby did not have the pulmonary surfactant, which is a fluid mixture of lipids and proteins in the alveoli of the lungs and which is required to breathe properly. So, she was given bovine surfactant therapy. Her stomach was decompressed using the nasogastric tube and bovine surfactant, extracted from bovines, was fed through an endo-gastric tube, ” said Dr KR Jayakumar, Chief Paediatrician, Nagapattinam General Hospital. Dr Jayakumar along with three other paediatricians attended to the child. Then the baby was put on a ventilator for two weeks, and on a continuous positive airway pressure (CPAP) machine for another two weeks. She was then fed with her mother’s milk. However, Shivanya did not develop the ability to suckle. “Seven of us were taking care of the child as our own and treated her as special. So, we pumped the mother’s milk and gave it to Shivanya using a gastric tube for two weeks. Then, Shivanya was introduced to her mother for breastfeeding, eight weeks after she was delivered. Slowly and steadily, she gained weight and now weighs 2.2 kg,” said N Maruvarasi, a staff nurse in the hospital.