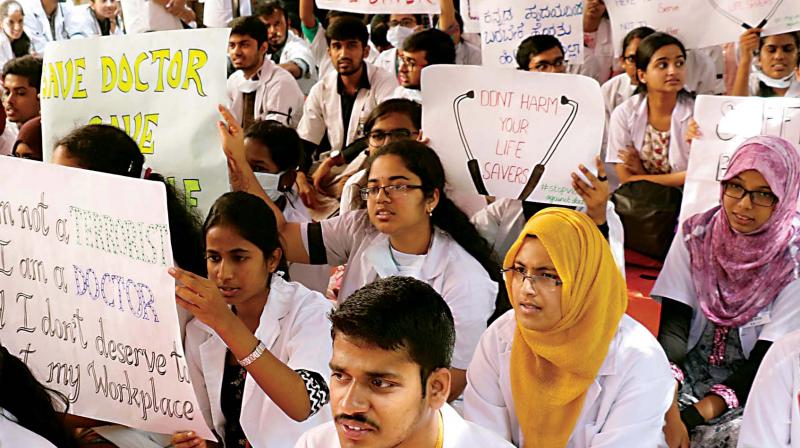 Assaults on the doctors and other healthcare professionals have become a trend in our society. Not long before, a young intern of Nil Ratan Sircar Medical College and Hospital in Kolkata suffered skull damage after a brutal attack in June. Now adding a new case to this trend, a postgraduate medico at Minto Ophthalmic Hospital in Bengaluru has been allegedly attacked by pro-Kannada activists for not speaking in Kannada on Friday.
While the whole Karnataka was celebrating their day of formation on November 1st, members of the pro-Kannada activists’ group allegedly asked a woman doctor to speak in Kannada before attacking her on November 1. While the doctors are saying that activists from the Kannada group entered the OPD of the hospital and assaulted a doctor, the regional group refuted the allegation. The chief of the group said the doctors were to be blamed for the eyesight loss of more than 27 patients and added that the doctors were protesting to escape the cases which have been filed against them. Earlier, Minto hospital was in the news for failed cataract surgeries where 24 people had turned victims.
“We agree that some people lost their sights but how come we are being blamed for it. A case has been registered against the doctors who treated the patients. Some Vedike people tried to attack a woman doctor on November 1,” a doctor said. The doctors also said that action should be taken against the pharmaceutical company which supplied the drug that was administered to the affected patients and demanded that action be taken against the company.
Indian Medical Association (IMA) and doctors from Bowring and Lady Curzon Hospital joined the strike expressing solidarity with the students. Meanwhile, students said they would continue the protest on Wednesday as their demand to arrest the activist who barged into the Minto Hospital and assaulted a PG student remains unfulfilled.
OPD services at Victoria and Vani Vilas were affected as most of the PG students sat in protest. Hospital sources said patients’ footfall went down by 25%. The Federation of Resident Doctors Association India (Forda) have threatened to go on a national-level strike if the accused who assaulted a postgraduate medico at the government run-Minto hospital are not arrested. The Junior Doctors’ Association (JDA) also hardened its stand and threatened a complete shutdown of OPD services in if their conditions are not met by then.
“We shall take the protest to its logical end. We will make not allow the issue to be politicised. “We shall take the make sure justice is delivered to all. When it comes to doctors’ safety, our government is fully committed. We are thinking of deploying KISF personnel at hospitals,” Deputy chief minister and medical education minister CN Ashwath Narayan said.
Deputy commissioner of police (south) Rohini Sepat Katoch said they would act against the offenders at the earliest. “Since the investigation is on, I cannot reveal details,” she said. A senior investigator, however, said the junior doctor was not manhandled. “CCTV footage shows the accused and the doctor arguing. Gowda urged the doctor to speak in Kannada and reply, she retorted in English. However, she was alone and around 35 pro-Kannada activists were shouting at her,” he said.