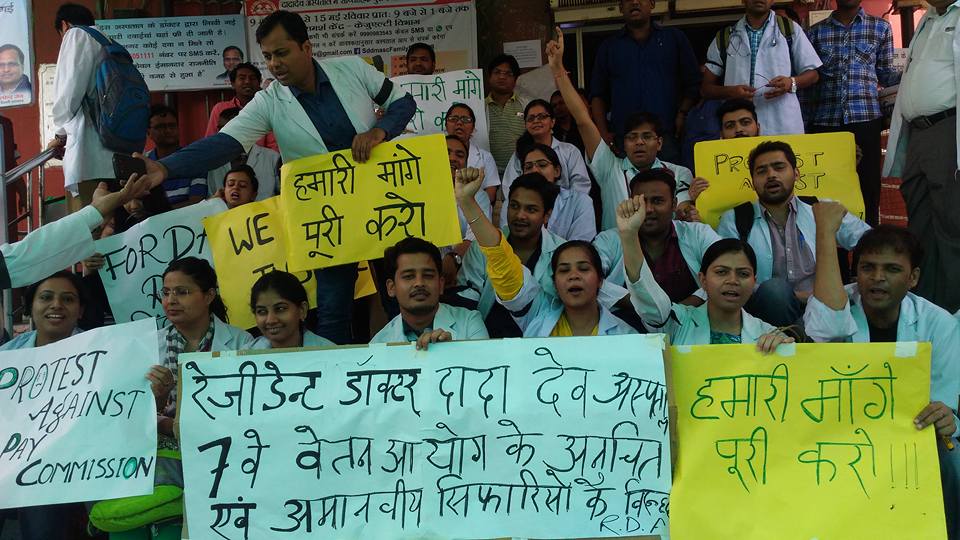 Doctors across Delhi and Mumbai went on a coordinated strike against the repressive pay recommendations of the 7th Pay Commission. The doctors are protesting against two key points in the Commissions recommendations which include salary hikes of only 13%, decrease in NPA (non-practising allowance) from 25% to 20% and seperation of NPA from HRA (house rent allowance). The coordinated protests at Mumbai and Delhi was initiated by the  Federation of Resident Doctors Association (FORDA) which had called for this protest from May 26,Thursday 1 pm to May 27, Friday 1 pm. Doctors wore black arm bands, carried out a candle march and protested with banners against the Centre’s regressive recommendations, which if applied would affect doctors for the next 10 years. The resident doctors associations have collectively warned that an indefinite strike would commence if their demands were not met by June 1. The Basis for Argument

Before getting in to a detailed account of the recommendations and why doctors are demanding an immediate change to these, it is important to start with two key points of  Report of the 7th Central Pay Commission.

First, in Sec. 7.6.12 it says ,”While interacting with the Unions/Associations, the Commission has felt that while job security, career prospects, work content, and emotional reasons to serve in this sector are important intrinsic motivators, pay continues to be an equally important factor for attracting and retaining talent in this sector.”

“Unlike the private sector, where salary of professionals may get periodically calibrated depending on many factors, including the forces of demand and supply , general working of the economy etc; in the government setup, a regular increase in the salary is ensured in the form of annual increments along with compensation for inflation…

Keeping in mind these two points that are stated by the Commission’s report itself, here is a detailed overview of what has ensued these past few days –

The salary hike promised by the Centre was at least 23.75% (for a salary of ₹10,000 is ₹2,375) whereas the actual hike is only 13% (for ₹10,000, is only ₹1,300). The key point to note is that if fixed, this recommended hike will stay in place for a period of 10 years. Doctors working in goverment setups see the recommendation as a huge setback, with rising cost of living and salaries across other sectors increasing. Doctors additionally, have to deal with long working hours, lack of functional infrastructure and are often subject to violence with little to no protection against such situations. The Non-Practising Allowance (NPA) which was started because doctors start practising only by the age of 30 as compared to other professions who start as early as 23. The NPA was also merged with the HRA, but now has been demerged from the basic salary. A hike in the NPA of at least 30% and utmost 40% was demanded by doctors but as it stands, has been reduced from the previous 25% to 20% of the basic salary. Doctors are demanding the NPA and HRA be merged and incrased by 40%.

It is important to note that the NPA which was the benchmark used to calculate other allowances has now merely been reduced to a mere allowance.

In Sec 7.2.21 of the report Dr. Rathin Roy (Member – 7th PC) states clearly why the ‘edge’ given to IAS personnel should removed. He says an IAS officers leadership and primus inter pares (an honorary title for those who are are accorded unofficial respect, traditionally owing to their seniority in office) does not validate increased increments. However, ironically since the II Pay Commission this edge and increase in salary continues to stay in place.

In Section 7.2.25 of the report, IAS Assocation has demanded that, “Ratio between an entry level IAS and the Apex scale should be at least 8-9 times and entry pay should be benchmarked at ₹1.375 lakhs per month.” This would effectively put an IAS salary on par with the salary of a private sector corporate job holder with an average of 4-6 years of work experience in management or IT/ITES.

While doctors continue to struggle to have basic salary increased, NPA and HRA not de linked the IAS continues to grow. Both the IAS and doctors form the backbone of this country. While the Centre sees the Administrative Services as more important than doctors, the public healthcare scenario in India today stands at a cross road where doctors are over worked at 18 hours a day, paid inadequate salaries and expected to ‘make do’ with barely functional infrastructure.

FORDA, MARD and other hospitals across India are merely demanding their basic rights to increased salaries. This would help them monetarily to survive day to day, show that they are valued and help them build a healthier nation. The demands of the doctors of a revised pay scale to PM Narendra Modi and his government are reasonable. One that can be easily resolved, without the doctors having to resort to the indefinite strike on June 1.