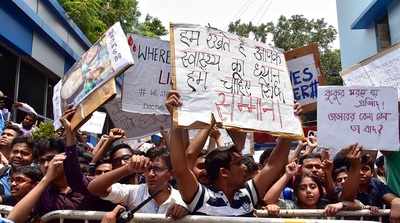 A recent attack on the doctors of NRS hospital has created a stir of agitation among the junior doctors across India. Now, in the light of the assault, junior doctors across the country have started a nationwide protest in solidarity with counterparts in Kolkata where a standoff is underway between the state government and junior doctors. The India Medical Association has declared “All India Protest Day” on June 14th, with doctors in many parts of the country holding protests.
West Bengal’s public-sector health system is in a paralysed state from Monday, since two young interns of NRS hospital faced a murderous assault from the family members of an octogenarian patient who passed away. The junior doctors have been on strike since Tuesday in protest.
Defying an ultimatum by the Bengal Chief Minister, junior doctors in West Bengal had refused to end their stir till they are provided adequate security in government hospitals. State-run healthcare services continue to be severely affected in Bengal for the fourth consecutive day of the strike.
Doctors in Delhi’s AIIMS, Maharashtra, Patiala and many other parts of the country have come out in support of the striking doctors in Bengal. All out-patient clinics and routine services will remain suspended at New Delhi’s All India Institute of Medical Sciences (AIIMS) and the Safdarjung Hospital with over 3,500 resident doctors from the two hospitals striking work.
Also, Doctors at North Bengal Medical College, Siliguri, observe strike. In Hyderabad, doctors of Nizam’s Institute of Medical Sciences will hold a protest march. In the light of the recent assault on doctors in Kolkata, Maharashtra Association of Resident Doctors (MARD) joined the nationwide protest on Friday to demand protection for doctors. Speaking to ANI, Prashant Chaudhary, President of MARD at Scion hospital, said: “The incident was clearly a targeted assault. This has now become a law and order issue. We express solidarity to the seriously injured doctors. We will abstain from providing our routine services from 8 am to 5 pm today, but at the same time we will make sure to inform the administration so that Outpatient Department treatment (OPD), Operation Theatres (OT) and wards keep running.” In Rajasthan’s Jaipur, doctors at Jaipuria hospital carry out their duties wearing black bands as a mark of protest over violence against doctors in West Bengal. Also, in Kerala, members of the Indian Medical Association in Trivandrum will hold protest over violence against doctors in West Bengal.
Resident doctors at Raipur’s Dr Bhimrao Ambedkar Memorial Hospital raised slogans of ‘We Want Justice’ as they launched their protest over violence against doctors in West Bengal, reported news agency ANI. Also
Union Health Minister, Dr Harsh Vardhan has appealed to striking doctors across the country to hold only symbolic protests. He told ANI, “ I’d like to assure all doctors that the government is committed towards their safety. I appeal to doctors to hold symbolic protests only & continue to carry out their duties.”