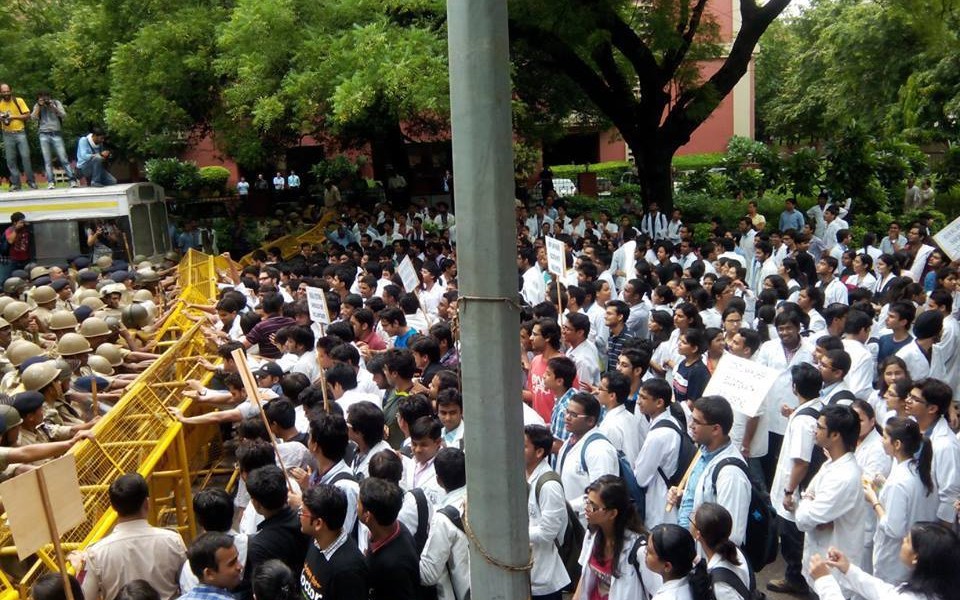 Can Doctors strike? A Supreme Court order, an MCI notice and a lots of confusion

“Recently, an MCI notice is doing rounds in the social media based on a Supreme Court order that apparently states that action will be taken on every doctor involved in strikes.”

So we decided to do bring out the facts about the order and the notice. And present it here so that you can decide what really is the order or notice is all about.

It all started with a writ petition filed by People for Better Treatment(read petitioner). The petition was considered by Honourable Supreme Court and passed an order in November last year.

The observations and the order passed by the Supreme Court

The above order confirms that the Supreme Court refused to pass any order and just passed the onus to the governing council for doctors that is Medical Council of India.

MCI takes cognisance of this order and calls for an ethics committee meeting and the details of that meeting is available in the notice sent by MCI to all the state medical councils.

Let’s dig what is there in MCI notice “The ethics committee discussed the matter in detail and is of the view that every doctor registered in the State Medical Council/ Medical Council of India are required to abide by the code of medical ethics.”

What the code of medical ethics by MCI says…

In the paragraph 2.1 titled “Obligations to the Sick” the code has the following points

“The Patient must not be neglected: A physician is free to choose whom he will serve. He should, however, respond to any request for his assistance in an emergency.“

You can access the complete document of the MCI code of ethics here.

In the notice the MCI adds,

“… a copy of the order of Honourable Supreme Court of India be forwarded to all the State Medical Councils with the request to take the cognisance into the matter related to strike by doctor, in case any such incident is brought to their notice and take necessary action against the doctor concerned in accordance with the order of Honourable Supreme Court”

Finally MCI asks State Medical Council to take action based on Supreme Court orders that never bans the strike by doctors but only desires that doctors shouldn’t resort to such things.

“Therefore, we would only express our desire that the Doctors, who carry out a noble service as God’s agent by saving lives of people, should not resort to strikes with any intermittent cause but undertake their responsibility with efficiency and utmost sincerity at all times.”

Well the facts are laid out and we would be more than eager to know whether there are any discrepancies and update them in the meantime. Lastly, the initial question will always remain a question. Don’t you think our laws have more such questions than precise answers.

But a comment published along with the article throws a different light on the issue.

“This news item is an outstanding example of uninformed journalism on the one hand and blatant motivated misinformation on the other. The facts are as follows:

i)—There is no landmark Supreme Court judgment as referred. A PIL was filed in the SC requesting that strikes by doctors may be banned. The Court said the matter has to be left to the discretion of the concerned professional council and gave the parallel example of the Bar Council of India in case of strike by lawyers.

ii)—The MCI, ever ready to fire from another’s shoulder to keep the doctors subdued, quickly issued a circular to State Medical Councils that “as per the SC judgment”, action may be taken against the striking doctors under the Code of Medical Ethics.

iii)—The fact is that the State Medical Councils are independent bodies and the Code of Ethics Regulations, 2002, are totally silent about a strike. There is nothing in the Regulations against a strike by doctors, which is the fundamental right of all citizens. Even IAS officers, and MLAs, including the Chief Minister, are on record for going on strike / dharna.”

SUMMARY—There is no SC judgment banning strikes by doctors. There is no MCI order that doctors cannot go on strikes. The MCI circular is a disingenuous device by the MCI to frighten the doctors against exercising their fundamental rights. It is shameful on the part of the MCI to do so and, unnecessarily, to drag the name of the Hon’ble Supreme Court in the process.