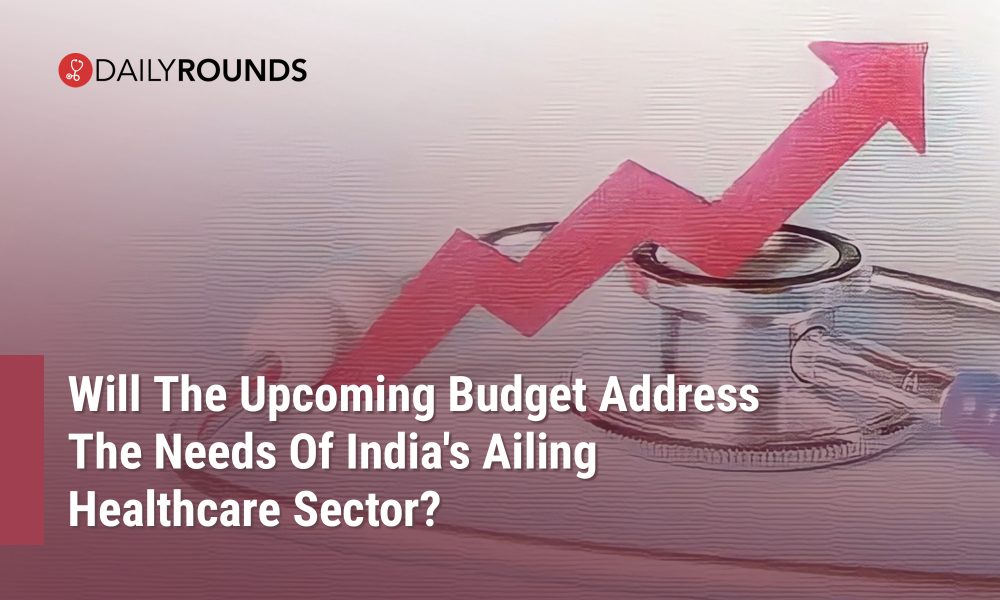 Will The Upcoming Budget Address The Needs Of India’s Ailing Healthcare Sector?

As the countdown for the Union Budget 2021-22 has begun, discussions over the sector-wise allocation have again taken centre stage in the national discourse. No wonder that the sector which is the biggest talking point this year is healthcare, all thanks to the COVID-19 pandemic.

The pandemic completely exposed India’s underfunded healthcare system. Critical patients all over the country were struggling to get ICU beds in the initial days. Some lost their lives as the ambulance reached late, while some died outside the hospitals waiting to get admitted. The pandemic exposed fundamental problems plaguing the Indian healthcare system, from infrastructure to manpower and many more.

Experts have predicted that the allocation for the healthcare sector in the Union Budget 2021-22 is likely to go up by 40 per cent. However, we will have to wait for Finance Minister Nirmala Sitharaman to make the announcement on Monday, February 1. Before getting to the expectations from the Union Budget for the healthcare sector this year, it is of paramount importance to understand that it has been one of the most neglected sectors irrespective of the governments in power.

Even after decades of high growth, the country’s spending on healthcare has been a meagre 1.3% of GDP, way below BRICS peers and developed countries. “Despite an increase in health expenditure over the last few years, India’s overall spending on the health sector is low and the situation must be corrected,” said Niti Aayog Member V.K. Paul back in 2019.

However, considering the present scenario, the nation expects a major share of the GDP to go towards the betterment of the health sector. Here’s what the healthcare sector expects from Union Budget 2021-22

This is where it all begins! Yes, the COVID-19 pandemic has once again exposed the severe underspending on India’s healthcare system. So, undoubtedly the sector needs to receive a booster dose in terms of finances in the upcoming budget.

The Union government’s stimulus package and PM CARE’s fund allocation to healthcare last year has already indicated that the allocation towards health in the budget would be at the centre stage this fiscal year. The experts have voiced that more than ever before, the pandemic reiterated the vital importance of a robust healthcare ecosystem and the acute need to strengthen health infrastructure in the country, both that need increased investments and a fertile environment to nurture innovations.

The major task of the government is to strengthen the health infrastructure of the country which was overwhelmed during the coronavirus pandemic. We had to make makeshift arrangements by converting public buildings such as schools and stadiums into hospitals. The government has already planned the establishment of hospitals to deal especially in virus infections in every district of the country by 2022 with the financial support of the World Bank. However, it will not be sufficient because there are heavy shortages of hospitals for other diseases, at all levels right from the villages to the cities.

Apart from increasing the number of hospital infrastructure, upgradation of the existing ones are badly required. Many of our public hospitals are in very bad shape. There is a lack of space, beds, equipment, or even stretchers for patients for treatment and examinations in case of emergencies. India currently has only seven beds per 10,000 population, against the global average of 27 beds per 10,000.

In the longer run, we also need more investment in Research & Development, equipment, and in improving the overall healthcare system. Incentives to the private sector should be provided to modernise healthcare facilities and increase investment in rural and remote areas across the country.

The pandemic has also exposed the lack of a sufficient number of medical professionals and healthcare workers in the country. India has only one medical doctor for every 1,404 people and 1.7 nurses per 1,000 people, according to the Ministry of Health and Family Welfare. This is lower than the World Health Organisation benchmark of one doctor and three nurses per 1,000 people.

A large workforce is required to be trained in this profession to enable the country to deal with the present as well as future emergencies. Because we can’t let our doctors and medical staff work day in and day out once again! The situation certainly needs an urgent fix.

For this, we need to open more medical institutes and nursing colleges all across the country and should revamp the existing ones. In addition to this, digital learning should also be promoted because the field of medical education cannot remain immune to the effects of e-revolution.  Sanitation, hygiene, and preventive healthcare training centres are also the need of the hour for the overall betterment of the healthcare workforce.

Increased budget allocation for the promotion of telemedicine and national digital health mission implementation will help in building a strong digital healthcare ecosystem within the country. Telemedicine played a crucial role during the pandemic turning out to be the safest interactive system between patients, both infected and uninfected, and clinicians.

The upcoming Budget is also expected to encourage the setup of hub facilities in government medical colleges in various states for enabling telemedicine services. However, the present taxation policies and regulations do not cover telemedicine. This is another area that will require the necessary attention in the upcoming Budget. In addition to this, Digital Health and Innovations should also be encouraged for India’s future growth in population health.

According to experts, the Centre should consider making healthcare more affordable by taking an immediate step of making a ‘zero-rating’ of Goods and Services Tax (GST) for healthcare services and products including drugs and medical devices. This will not only increase affordability but will also increase the accessibility of healthcare products and services.

While the lower economic sections have been covered under Pradhan Mantri Jan Arogya Yojana (PMJAY) health insurance scheme, it is time to extend insurance coverage to the middle class too for moving towards universal health coverage.

WHO further states that the mental health workforce in India is not up to the mark and there is a huge shortage of psychiatrists and psychologists in comparison to the number of people suffering from mental health issues. Reportedly, the budget allocated for the National Mental Health Program (NMHP) in FY2019 was brought down to Rs 40 crore from Rs 50 crore in FY18 while the actual funds spent were only Rs 5 crore each year.

Highlighting the expectations from the government, Manipal Hospitals MD and CEO Dilip Jose said that the public spend in healthcare needs to increase from the current 1.2 percent to at least 2.5 percent of GDP in the next 3 years, much of which should be invested in creating and modernising our infrastructure. “Hopefully, the Budget for 2021-22 would take the important first step towards this,” he added.

The healthcare sector in the country is desperate for more support for sustainable growth. For this, a specially designed fiscal stimulus can be funnelled into public health and policy bottlenecks removed so that the sector becomes the engine of GDP growth. Let’s hope that the Centre would come with a booster shot for healing the ailing healthcare sector with the budget presentation on Monday, Until then let’s keep our fingers crossed!