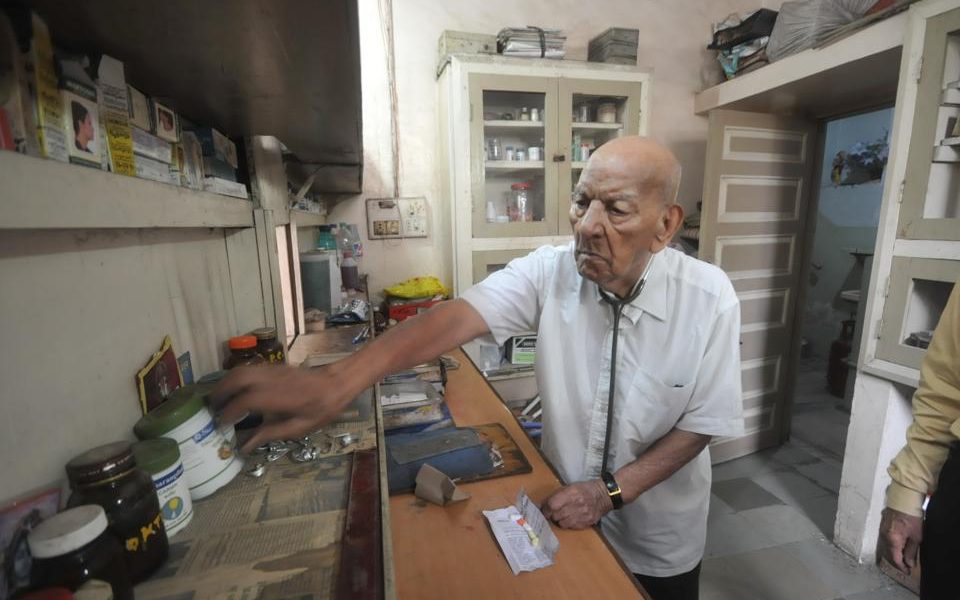 Dr. Balwant Ghatpande became one of the oldest Indian practicing doctors on March 15, 2017. On that day, the man turned 102.

With an enduring passion for science, the doctor navigates through a changing medical landscape.

“I would never retire,” he says. “Until my death I wish to continue to practice medicine. I pray that I should die while working in the dispensary.”

The doctor’s family is chock-filled with medical professionals, all apparently maintaining similar values.

“Being a doctor is one the most noble professions, where you can do the highest service to people. It gives humanitarian satisfaction, as well financial security. I have received everything from this profession, from reputation to money and the goodwill of people,” he says.

The younger generation views the doctor with esteem as well, as is evidenced by these words of his son, Sawanand Ghatpande, “He has no other interest except his practice, that is his passion.” Perhaps not surprisingly, his grandson, Chaitanya Ghatpande calls him a workaholic.

In fact, Dr. Balwant corroborates it by saying, “Yes I am a workaholic and a proud one. I work over 10 hours a day and that also every day of the week. I don’t like to sit idle at all.”

But what does he do when he’s not working? He reads the medical journals and newspapers, of course.

Strict routine for a healthy life

The doctor’s daily routine is not for the lazy. After waking up, he exercises for about an hour before sitting down to read the newspapers. He says that for many years now he bathes only in cold water- he says it’s the secret to his unblemished health.

One of the few instances when his health took a beating was in 1995 when he had a fracture. In fact, apart from that one time, the doctor claims he has never had to visit a doctor because of an ailment. Healthy lifestyle, regular exercise and moderate diet- that’s the mix which keeps him ticking.

On the changing times in medicine

As someone who started his career in 1941, he has interesting things to share regarding the way diseases change over time. “ A decade ago there use to be epidemics of cholera, influenza, dysentery, but now that has gone down, especially because of improved hygiene conditions. Diseases like dengue and malaria have increased. Diseases of the modern world are very different from the old times, especially because of food quality and food habits now,” he says.

As for the present situation of medicine in India, the doctor has this to say, “Everybody wants a specialist. Only after consulting a specialist will they come and visit a general practitioner now. Also, the old medicines are almost gone, so the new doctors don’t really come to me for advice. I don’t use these new medicines.”

Dr. Balwant accepts only Rs. 30 from each patient. But according to his son, even so, most of his earnings go to charity.

Rajpathak Ghanasham is among the doctor’s loyal patients. He has been visiting the dispensary for 35 years now. And he is full of praise for his doctor, “ I trust him 101 % as a doctor. The unique thing about him is that he works on symptomatic treatment, where he manually checks the patients unlike today’s doctors. Also, he hardly charges anything.”