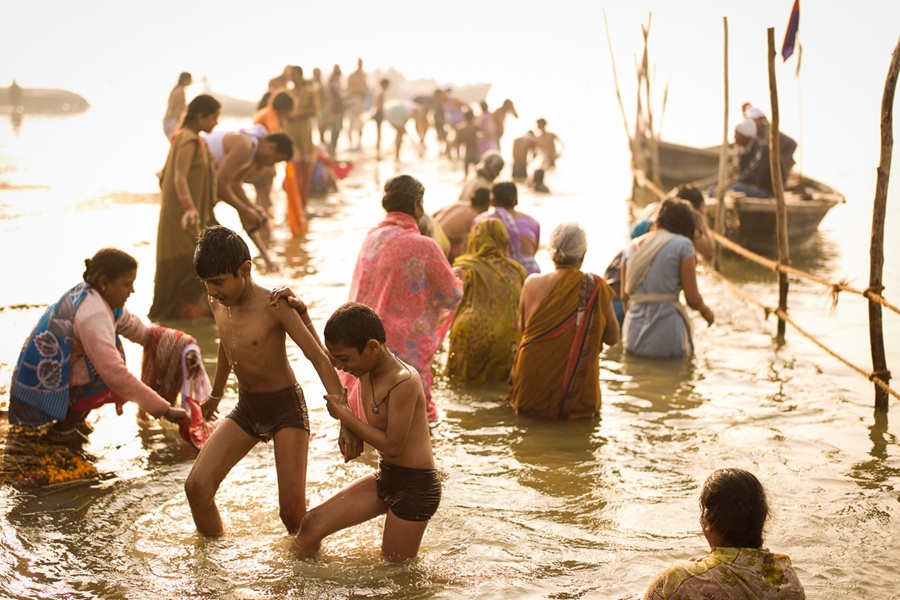 A young girl could get a fever after bathing in the near-freezing temperatures of the Ganges during the Kumbh Mela- the world’s largest religious congregation. She could have flu-like symptoms and be dehydrated. Her condition could even be contagious.

Aaron Heerboth, a co-ordinator of the Harvard public health research team during the Mela in 2013 saw just such a girl being brought to a doctor by her grand-father. The girl is led to a nearby hospital bed where she gets an injection for the dehydration.
Mere hours later, her diagnosis becomes visible in an app which could be seen by Heerboth’s colleagues stationed in Delhi, Mumbai and New York. On their screens, they literally saw how healthy the Maha Kumbh Mela was.

The Mela- a boon for medical researchers

Mass gatherings like the Mela could be hotbeds of disease transmission. Researchers do study how diseases-from cholera to bird flu spread at these events. Their hope is to prevent a future pandemic.

However, Heerboth and his team had a broader goal. Every 12 years-when the mela is held, a wide network of hospitals, roads, homes and businesses is built afresh. This made the Kumbh a megacity which could be monitored top-down, something impossible with a conventional city.

Also, the Kumbh doubles as a model of what’s to come. The population in urban areas around the world is going up and most of this growth is to be found in Asia and Africa. The medical researchers studying the Mela use it as a test bed for the future. How well could the swelling cities of the world provide good health care to literally millions of new residents?

Kumbh dwarfs any other mass gathering in the world both in size and duration. Every twelve years, the grounds where the Mela is held- where the Ganges and the Yamuna rivers converge gets transformed into a megacity. The Mela attracts around 70 million pilgrims from across India- that’s a population bigger than that of Tokyo, Jakarta and Delhi put together.

The pilgrims believe that bathing in the waters of the rivers would cleanse them of their sins, bringing them that much closer to nirvana.

But the thing is, hundreds of thousands of these pilgrims would require medical attention for their mortal coils during the festival.

It was Satchit Balsari-a Mumbai born emergency room physician at Weill Cornell Medical College in New York who selected researchers from Harvard, Cornell, Yale and the University of California, San Francisco and medical institutions across India to create a surveillance system of health care for the Kumbh.

The data thus collected would help the researchers gain a better understanding of the disease distribution over time in a huge population.

Since power outages are frequent at the Kumbh and the Internet connection unreliable, Balsari repurposed an application called EMcounter- something he had earlier helped create to collect patient data for emergency rooms in India. For Kumbh, EMcounter was re-created as an iPad app in which data would be stored locally and uploaded to a remote server whenever an internet connection became available.

But even with the app, and even though Heerboth and Balsari had worked on global health projects in the subcontinent before, a project of this scale was a mountain they were facing for the first time.

Too many patients, too few doctors

By the time Heerboth arrived at the Kumbh in January 2013, the festival was at its peak. And even though it has been up and running for just a few weeks, the city looked as though it has always been there- complete with vendors of bottled holy water and rows of multicolored tents.

And inside a nearby hospital tent, chaos was breeding. The line of patients elongated rapidly as doctors’ visits became proportionately shorter. Eventually, to manage the overwhelming number of patients the doctors could do barely more that writing prescriptions and giving them a packet of pills.

On the largest bathing day- just two weeks after Heerboth’s arrival- the crowd swelled to nearly 30 million people. Not surprisingly, the morale of the doctors and medical students plummeted. It took hours for the researchers to log the patient info into their iPads. Also, the user error was high. To make things worse, a group of volunteers threatened to quit.

The project which was years in the making was in danger of crumbling.

To find a solution, Rishi Madhok, the software’s lead programmer, flew in. After touring the tent hospitals, Madhok, along with Heerboth came up with the idea that they could completely replace the hospital’s paper record-keeping with their survey tool. This way, the volunteers won’t have to transcribe data- a laborious, not to mention mind-numbing task. Instead, it could be digital from the outset.

It took Madhok just a few days to revise the software so that doctors could input the patient data digitally. Once the diagnosis is in, a prompt will appear on the screen with a multiple-choice selection of treatment options. Prescriptions that are entered in the software were then instantly shared with a pharmacist mere meters away. This (theoretically) brought down the prescription errors, and the data began to flow.

More than 2,80,000 people received medical treatment at the Kumbh that year. The data for almost 50,000 patients were recorded by Heerboth and his team: the biggest ever digital medical dataset collected from a mass gathering.

It was found that the most common patient complaints were sore muscles or joints, cough and fever. Though waterborne outbreaks could be a risk in such densely clustered gatherings, very small number of people reported having diarrhea. Also, no outbreaks of infectious diseases like cholera were reported.

In fact, the only outbreak detected was in patients complaining of cough and respiratory symptoms on the busiest bathing day- potentially a minor viral outbreak that spread through the crowd.

However, digging deeper into the data, one could find some intriguing findings on the hospitals. One major finding was with the medications prescribed. It was found that ninety percent of the patients who visited the smaller satellite hospitals received medications. While some of these drugs were rather harmless- like multivitamins or acetaminophen, many patients were prescribed short courses of antibiotics even in the absence of proper diagnosis.

As per Balsari, the overprescribing of antibiotics that was recorded at the Kumbh is common in clinics across India. And such practices have already made the country a hotbed for drug-resistant “superbugs.” Balsari opines that doctors would do well to have clinical guidelines to guide their prescribing behaviors in future Kumbhs.

The data also pointed to methods by which hospitals could be run more efficiently. It turned out that the busiest satellite hospital attracted more than six times the patients as the least busy hospital. The catch was that they were both identically staffed.
As Heerboth puts it, “A sector hospital could have 18 free beds, be fully stocked with medicine and have zero patients. Another more highly trafficked hospital may be packed with patients and be out of medicine and supplies.”

On the basis of this data, Balsari worked with the Indian government to improve the allocation of resources at the smaller Nashik Kumbh- which was held in the summer of 2015.

How Indian healthceare sector could prepare for the future, according to researchers

In India, the urban population is expected to double in 30 years- the end population would be 700 million. City planners would need all the lessons they could garner to decide where to have hospitals, how to staff them also the types of ailments to anticipate.
The researchers say that if the urban hospitals could conduct their own data-driven planning, it would be even better. Using digital medical records and apps, one could easily respond to the changing populations of the cities.

Since the cell phones appeared before landlines in many parts of India, medical technology should also likewise adapt. As Balsari points out, since there exists no national system of medical records, Indian medical records may be individually stored in the phones.

Put another way, the medical solutions that work for India won’t look like anything that’s ever been done anywhere before.