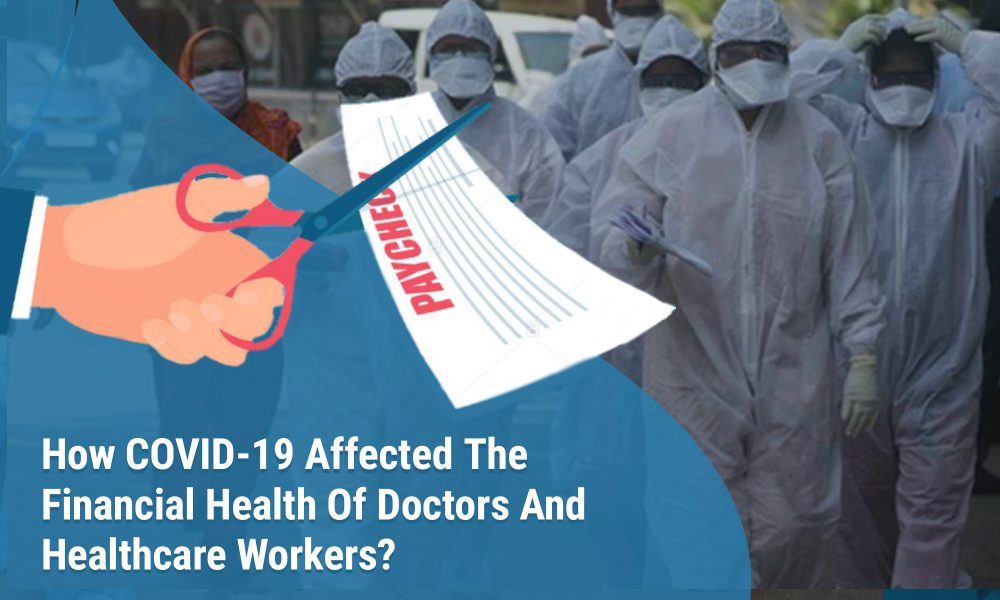 How COVID-19 Affected The Financial Health Of Doctors And Healthcare Workers?

Nothing can be more perplexing than the country’s apex court having to intervene to ensure that doctors and healthcare workers at the forefront of the battle against coronavirus are paid their salaries without any dues. Doctors having to strike work over non-payment of wages for three months and that too in the national capital, right under the nose of the Union and Delhi governments, is shameful. There was a glimmer of hope that the pandemic would finally shift focus and attention to the healthcare sector, but all that has gone in vain. The State and the authorities, it appears, would rather indulge themselves with the easy part: Lighting diyas and Showering petals!

Taking serious note on the non-payment of salaries to doctors treating COVID-19 patients, the Supreme Court on Friday said that the country cannot afford to have ‘dissatisfied soldiers’ in the war against the pandemic, and asked authorities to go the extra mile to raise funds for them.

“In war, you don’t make soldiers unhappy. Travel the extra mile and channel some extra money to address their grievances. Country cannot afford to have dissatisfied soldiers in this war which is being fought against corona”

The top court was hearing a plea by doctor Arushi Jain, who alleged that the frontline healthcare workers engaged in the fight against COVID-19 are not being paid salaries or their salaries are being cut or delayed. However, the bench of Justice Ashok Bhushan, S K Kaul, and M R Shah said that the court shouldn’t be asked to resolve the issue regarding the non-payment of salaries of healthcare workers and instead asked the government to settle the issue.

The Supreme Court remarks came after the reports from two hospitals in the national capital gained public attention. More than 350 resident doctors of Kasturba Hospital and Hindu Rao Hospital run by the North Delhi Municipal Corporation have threatened to resign en masse citing non-payment of salaries for the past three to four months.

Recently, news emerged that salary arrears of the past three months have not been credited to more than 3,000 health workers under the North MCD. Medical associations have written multiple letters to chief minister Aravind Kejriwal, Lieutenant governor Anil Baijal as well as Prime Minister Narendra Modi by citing the existing salary woes but to no avail.

“Doctors, healthcare workers, and policemen are being hailed as ‘corona warriors’, They are being applauded and honoured. Respect is good but can we buy ration with it? I do not want to politicise the issue. I do a job and I want to get paid for it. Any work with no pay is like slavery. I want the masses, the government, the judiciary, and the human rights commission to take cognizance” said Dr. Sunil Kumar, president of Kasturba Hospital’s RDA.

As the government adjusts expenditure against the falling revenue, the healthcare workers are provided with yet another hassle in the form of salary cut and delayed payments. Doctors in the state health service, medical education department, and students doing their residentship have been facing pay cuts ever since the imposition of nationwide lock-down.

In Mumbai, India’s coronavirus hotspot, doctors working in civic body run hospitals have got between 30- 50% pay cut. The residents employed in the service of BMC hospitals have also received similar salary cuts. Meanwhile, As part of its salary challenge to cope up with the financial crunch imposed by COVID-19, the Kerala government had moved an ordinance for a salary cut of all the employees including doctors and healthcare staff working in the state-run hospitals and clinics. According to the ordinance, an amount equivalent to a month’s salary will be mandatorily deducted from the employee’s account over a period of five months. However, the Kerala High Court has stayed the order issued by the government by citing that the decision to cut salary was not supported by any provisions of law.

Also read: When COVID-19 Opens Up The Fault Lines In India’s Healthcare Infrastructure

The lock-down has further impacted the private health sector as well and this in turn has resulted in job losses, pay cuts, or deferred salaries for doctors, nurses, and other medical staff. The drop in patient footfall has been a problem for big and small hospitals alike.

In general, patients are visiting doctors only for necessary ailments. Most patients and doctors are postponing the elective procedures and followup cases. This is a move to reduce the infection from hospitals/clinics. There is also a drastic reduction in the number of paediatric patients visiting hospitals, all these lead to reduced income levels of doctors.

According to the managing director of Fortis Healthcare, salaried doctors at some of their hospitals have seen a pay cut of 25-50% where senior management has also taken voluntary salary reduction between 10-50%. The Bengaluru based Mallige Hospital has also announced a 30% to 50% salary cut for doctors after their occupancy fell to less than 15%. With a 90 percent drop in OPD consultations, consultant doctors who see patients at different hospitals are also facing the pinch.

“We will have to resort to cutting salaries or laying off employees in the private health sector. Those earning below Rs 15,000 will not see cuts but nurses earning below Rs 30,000 might see a 10-20% cut. Doctors earning above Rs 50,000 can expect higher cuts. However, we have not decided on it. We will reinstate the original salaries once the economic situation becomes better,” said Dr. H M Prasanna, member of the committee and president-elect of Private Hospitals and Nursing Homes Association, Bengaluru.

“If you are risking your health to keep this country moving and you are making minimum wage, you deserve a raise,” says Canadian Prime Minister Justin Trudeau by addressing the healthcare professionals and other essential workers in the country. Even amidst the pandemic, the Canadian government is trying their level best to keep up the morale of their frontline healthcare professionals. In a similar move, the West Bengal government recently hiked the stipend of junior doctors and interns in the state. “Though the state government is going through a severe financial crunch, it decided to hike the salaries as a token of recognition and appreciation of the selfless work done by the doctors,” said Chandrima Bhattacharya, Minister of State for Health quoting the move by the state government.

Similar efforts and steps have to be adopted by governments and authorities across the country as such gestures not only ensures financial support but also helps to increase the morale and spirits of doctors during the toughest of times. Remember, doctors can’t earn their bread and butter with the diyas you light or the petals you shower!