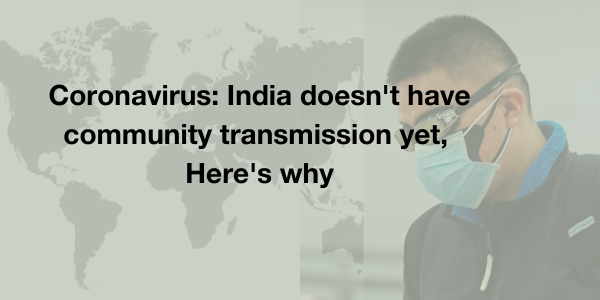 Coronavirus: India doesn’t have community transmission yet, Here’s why

From suspending commercial aircraft to asking people to work from home, India is intensifying the measures to fight the coronavirus. But the experts have earlier opined that India could be the next hotspot for coronavirus. Though we couldn’t rectify this doubt right now, the country’s infection count is rising, with the total number of cases standing at 206.

Speaking about the spread of coronavirus in India, the Indian Council of Medical Research (ICMR) Director-General Balram Bhargava said that the country is in the second stage of transmissions, i.e. local transmission. He also added that the progression to the next stage might eventually happen but by delaying it India is making itself better prepared to localise and contain the situation.

According to a report by the Times Of India, he also said that India has around a 30-day window to halt the beginning of community transmission of Covid-19 cases.

“We already know that we are in stage two. We are not in stage three, clearly as of now. There are four stages. The third stage is community transmission which we hope we shouldn’t have,” said Bhargava. “It would depend on how strongly we close our international borders, in terms of which the government has taken very proactive steps. But can’t say that community transmission won’t happen,” he added.

Different stages of the spread of the virus

As of now, the country has 72 laboratories to test the samples. Further, ICMR is going to start rapid testing laboratories which have high throughput systems to test COVID-19 samples, with a testing capacity of 1,400 samples a day. The additional centres will be at various medical colleges and other places. It includes the Council of Scientific and Industrial Research (CSIR), Department of Biotechnology (DBT), and Defence Research and Development Organisation (DRDO) among others.