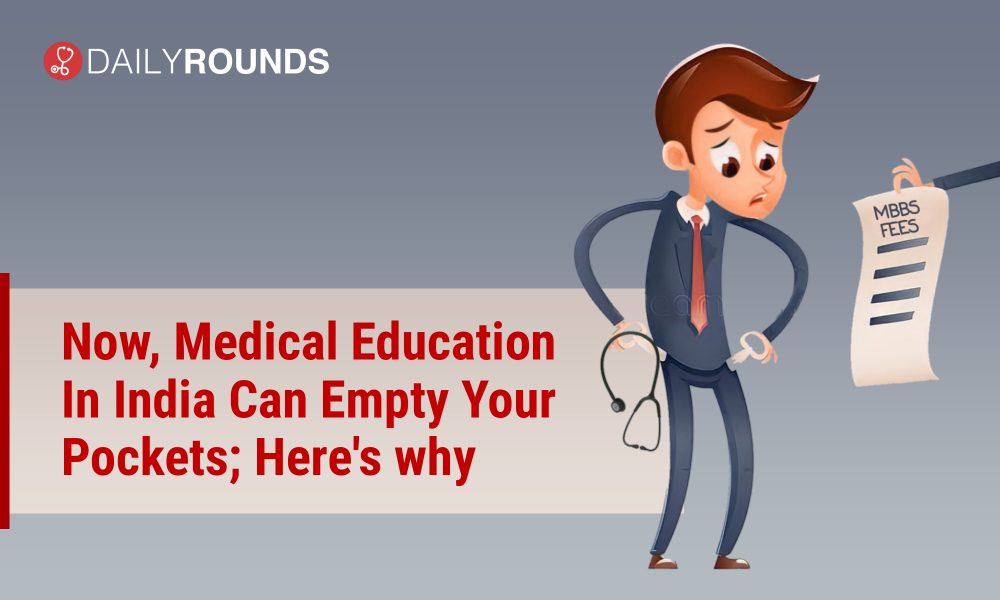 Now, Medical Education In India Can Empty Your Pockets; Here’s Why

The shortage of medical staff in the public health sector has been one of the impediments in India’s Covid-19 containment strategy. Insufficient health workforce has been a long-standing problem, particularly in government health facilities that remain overburdened and understaffed.

It’s high time to resolve this issue but the solution surely doesn’t lie in increasing the cost of medical education as some of the states have already done. A part of the reason why India is short of doctors is that medical education is expensive and those who have the means to acquire it either prefer to work in private health facilities in the country or migrate overseas, said experts, citing how the increasing fees in government medical colleges in the country are keeping the poor but deserving students out.

In addition to this, the Haryana government’s decision to hike the MBBS course fee in its medical colleges by nearly 66 per cent has also met with sharp criticism from the medical fraternity, which said the move is “aimed at benefiting private players” and making medical education “unaffordable” for aspirants from lower-middle and middle classes. The critics also lashed out at the decision to increase the fee at a time when doctors are at the frontline fighting the Covid-19 pandemic, calling the move “shameful”.

The four-year MBBS course fee in the state-run Medical Colleges has increased from Rs 56,000 annually to Rs 80,000. Unlike the standard fee that was charged for all four years until last year, the Haryana government has said that the fee will now be increased by 10 percent every year. This takes the total fees to Rs 3.71 lakh for the four-year course as against Rs 2.24 lakh charged earlier. However, the bigger shocker for students came in the form of the Rs 8.9 lakh-9.2 lakh annual bond that has to be paid by students. Taking into account the annual fees and bond, the total cost for a four-year MBBS degree will now be close to 40 lakh rupees!

According to a government notification dated November 6, students can either take an education loan from banks/NBFCs for this purpose or pay the lump sum amount (loan plus annual fee) themselves. The State government will put the bond amount in a separate trust. The funds maintained in the corpus will be utilised for repayment of loan instalments of graduates who have obtained jobs in government medical institutions and also for improvement of infrastructure and equipment in government medical colleges.

In case a candidate avails an education loan from a financial institution, the repayment will commence after the moratorium period of the course, which is four-years plus one. The tenure of the loan will be seven years after the moratorium period. After graduation, if a student gets a job with a state institution, the government will pay back the bond amount in addition to the salary. However, a student has to stay employed with the State-run medical institution for at least seven years.

The State government will stop paying the loan instalments the moment the candidate quits the State government job. In case a student does not join a government medical institution after completing the MBBS course, the loan repayment will be his/her individual responsibility. Also, there’s no assurance that every student who completes the graduation would get posted in state-run medical institutions. The notification has also increased the fee for medical PG courses, which will start at Rs 1.25 lakh with an increase of Rs 25,000 every year.

However, the state government’s new policy on the revision of fee structure for medical courses has come under criticism from different quarters. The latest criticism of the Haryana government’s decision comes from Indian Medical Association (IMA) president Dr. Rajan Sharma. Interacting with a leading media agency, Dr. Shama said that “I strongly condemn the decision. Shall we do this to students from poor families who get admission in government colleges after qualifying the entrance exam?” he further asked.

Talking about the new scheme to incentivise medical education in the state, Dr. Sharma said that “In the ordinance, it is clearly written that if a student comes to Haryana government job, the government will provide a loan, the government will pay EMI but employment is not guaranteed. What was the necessity to bring this ordinance?” he further added.

Similarly, the student’s wing of the Indian Medical Association called the move “unfair” and “exploitative”. “The monetary imposition of fees in lakhs at government institutions will be ruining the future of thousands of aspirants,” said IMA’s Medical Students’ Network. It added that the revision in the fee structure and the bond system will make medical education a challenge to the majority of aspirants annulling the promise of the right of education for all. The students’ body further urged the government to withdraw the decision immediately.

Unfortunately, Haryana is not the only state in the country where pursuing medical education would empty your pockets. Soon after the nationwide lockdown, the Punjab government hiked the MBBS course fee in its medical colleges by nearly 80 percent.

Similarly, the annual fee for MBBS students in two major government medical colleges in Uttarakhand has been hiked by over eight times, four months ago. The situation is no different when it comes to the southern states. Last week, the Karnataka government hiked the fees for medical and dental undergraduate seats in private colleges. The increase is 15% for government quota seats in private colleges and 25% for private quota seats.

In Kerala, the fee regulatory committee had fixed the fee ranging from 6.32 lakh to 7.65 lakh for MBBS courses in various self-financing colleges for the academic year. But some of the self-financing medical colleges are demanding fees of more than Rs 20 lakh. In this backdrop, the state government is moving to the Supreme Court against the exorbitant fee structure that according to the health department will make higher studies difficult for students.

The high cost of medical education in these states not only keeps the poor students out of the field of medicine, thereby exacerbating socio-economic inequality, but also deter doctors who graduate after paying enormous fees from joining relatively low-paying government jobs.

According to experts, the fee hike is expected to have a reverse effect; doctors produced by the state will never come back to serve it because of the high initial cost of medical education and lower government salaries. What’s worse? The hike will ultimately deteriorate the nation’s rural health services and widen the gap between rural and urban healthcare systems.

At present, India is having a shortage of estimated 6,00,000 doctors and we can’t expect these numbers to reduce any further by making medical education unaffordable for a huge majority of the low and middle-income populations in the country. One thing is for sure, if the cost of education becomes a factor that forces students to give up a career in medicine, it would adversely affect the entire nation for years and years to come!