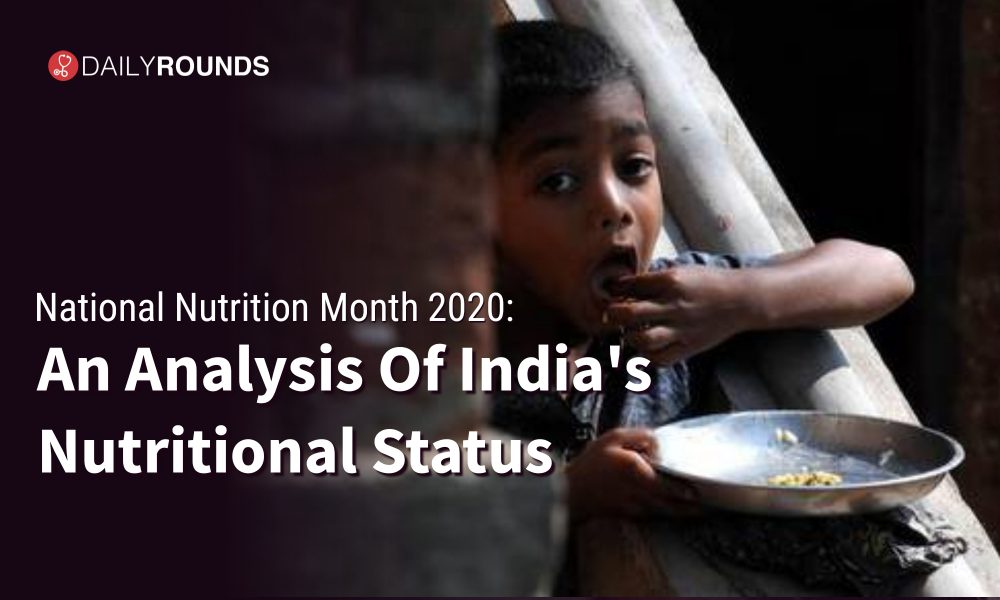 In 1903 Thomas Edison was concerned about the healthcare of his time and stated: “The doctor of the future will give no medicine but will interest his patient in the care of the human frame, diet and in the cause and prevention of disease.”

It’s been more than a century since Edison said this, but it seems like the world has taken a long time to realise the essence of those words. Nutrition and dietary plans have taken a front seat in the healthcare routine of individuals all across the globe. In accordance with this, India celebrates the first week of September as National Nutrition Week and dedicates the entire month for Nutrition related campaigns and activities. However, the country has grave concerns to address when it comes to nutrition!

The annual nutrition event organised by the Food and Nutrition Board within the Ministry of Women and Child Development highlights the importance and role of the right nutrition for the human body and why it is important to have a balanced diet with a combination of essential nutrients. The main objective of this is to evaluate and educate people all across the country. This, in turn, helps in identifying and resolving many health issues that occur due to dietary negligence.

In addition to this, Prime Minister Narendra Modi in his Mann ki Baat session said that the entire month of September will be observed as ‘Poshan Maah’ i.e. ‘Nutrition month’ even amidst the pandemic. He recalled the maxim – “Yatha Annam Tatha Mannam,” which means that mental and intellectual development is directly related to the quality of our food intake. Keeping this in mind, let’s look at the nutritional status of the nation in detail.

India is one of the world’s largest producers of milk & pulses and ranks as the second-largest producer of rice, wheat, sugarcane, groundnut, vegetables, fruits, and cotton, as per the Food and Agriculture Organization of the United Nations (FAO). Despite the status, 14 per cent of India’s population is undernourished, according to ‘The State of Food Security and Nutrition in the World, 2020’ report.

The report states 189.2 million people are undernourished in India and  34.7 per cent of the children aged under five in India are stunted. It further reports that 20 per cent of India’s children under the age of 5 suffer from wasting, meaning their weight is too low for their height.

In fact, India is home to the most number of malnourished children all across the world. We get a clear picture of this when we compare the nutritional status of India in National Family Health Survey 2015-2016 to the previous edition of the survey, the percentage of children who are anaemic has come down from 69.4 per cent in the country, but it still stands at 58.6 per cent. The level of children under 5 years who are severely wasted has increased from 6.4 per cent to 7.5 per cent, and child stunting which was previously marked as 48 per cent stands at a soaring 38.4 per cent even today!

In addition to all this, as per Global Hunger Index (GHI) 2019, India has been ranked 102 out of the qualifying 117 countries that were assessed. The Global Hunger Index comprehensively tracks and measures hunger across the world and India’s rating in the 2019 year has been poor with a score of 30.3 which according to their guidelines, falls in the ‘serious’ category. However, neighbouring countries like Pakistan, Nepal, and Bangladesh have secured a better rank than India. While Nepal is ranked 73, Bangladesh and Pakistan are ranked 88 and 94 respectively.

The data certainly shows that malnutrition is indeed one of the most underrated problems faced by the country. Over the course of time, various governments have initiated several large scale supplementary feeding programmes aimed at overcoming specific deficiency diseases to combat malnutrition. This includes programmes such as the distribution of prophylaxis against nutritional anaemia, Special Nutrition Programme, Balwadi Nutrition Programme, ICDS programme, and Mid-day meal programmes. Even though most of these programmes which are aimed at children, lactating mothers, pregnant women, and women in reproductive age groups have brought in results, it’s large scale implementation is still a distant dream for the nation!

The crisis brought about by the pandemic has further worsened the nutritional status of the country and India’s poor and hungry are being affected the most. Children are not getting their share of mid-day meal from the schools as every educational institution in the country has been closed. Further, the Supplementary Nutrition for ICDS projects in rural areas through Anganwadi Centres has also been disrupted to a great extent.

A study published in the Journal of Global Health Science on July 16 had estimated that the nationwide lockdown to curb the spread of the novel coronavirus-led pandemic could contribute to food shocks, which in turn, could increase the chances of malnutrition. The study accounted that over 5 million children are at risk of falling in the wasting category of malnourishment, while an additional 2 million children are at risk of being pushed into the severe wasting category.

The nation will have to pay a huge price if it doesn’t initiate timely measures to overcome this crisis. Improving the nutritional status of its citizens is imperative for a nation in its road to development. The recent initiative by the Centre, named as ‘Poshan Abhiyaan 2018-22’ has set goals to reduce child under-nutrition (stunting and underweight) and low birth weight by 2 per cent a year, and anaemia across age groups by 3 per cent, and create a mass movement for good nutrition in the country. The scheme which looks good on papers needs a collective effort from the government, concerned authorities, and the citizens for bringing out the desired results.