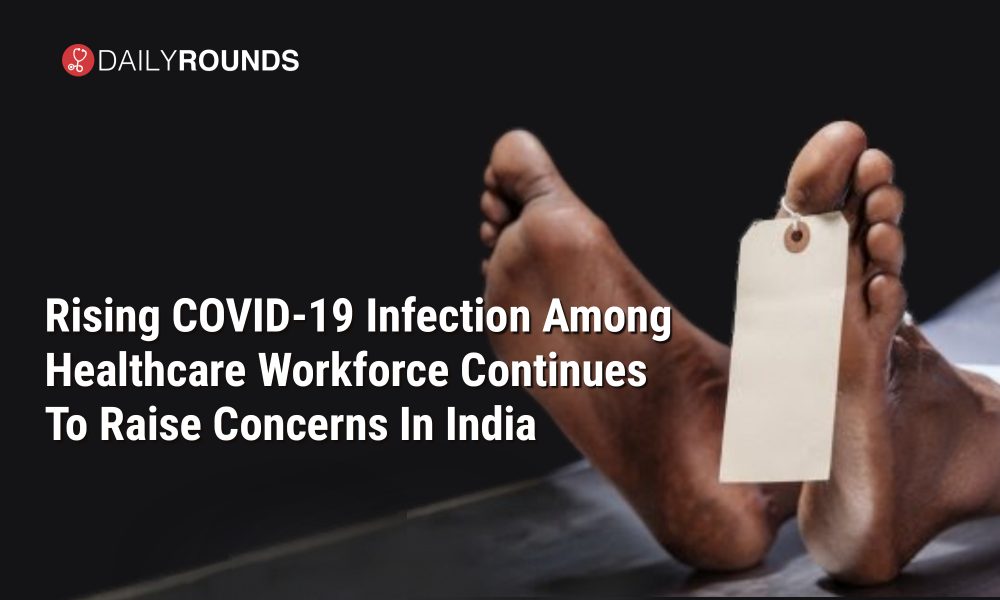 As the fight against the spread of the coronavirus enters a critical phase, a large number of doctors, nurses, members of ward staff, and other healthcare workers across the country continues to be on the receiving end of the deadly pandemic. The claws of the pandemic seem to be following the healthcare workers irrespective of their roles.

The recent news report by Times of India reveals that more than 87,000 healthcare workers have been infected with COVID-19, with just six states — Maharashtra, Karnataka, Tamil Nadu, Delhi, West Bengal, and Gujarat — accounting for three-fourths of the case burden and over 86% of the 573 deaths among the healthcare workforce.

The three states also reported the highest number of deaths among healthcare professionals, turning out to be a ‘graveyard’ for these COVID warriors. While Maharashtra reported 292 deaths, Karnataka and Tamil Nadu had 46 and 49 deaths, respectively.

The data which showcases a large number of COVID-19 infections and even deaths of healthcare workers in particular states is indeed a matter of serious concern. Public health experts all across the nation believe that such risks to healthcare workers can jeopardise India’s fight against the pandemic. After all, we can’t expect a ship to withstand a ferocious storm without the captain and the crew. Can we?

Following the prevailing situation, the issue has been further discussed in a review meeting headed by the cabinet secretary last week. As a result, the Centre has cautioned the states and UT’s about the high time need to protect the healthcare workers. According to officials, the possible factors responsible for high infections include lax infection control in healthcare facilities and the lack of stringent containment measures in areas where healthcare workers reside.

“We are living on the edge! The virus can catch us anytime, and we do know that. It can be either today or tomorrow… We are doing our level best to adhere to the safety measures but still, we are witnessing our fellow colleagues getting infected and all we can do now is to wait for our turn” said a staff nurse at Government Medical College, Thiruvananthapuram on condition of anonymity.

Earlier in March, during the initial days of the pandemic, the government had announced Rs 50 lakh insurance cover for all doctors, nurses, and other healthcare professionals fighting the battle of COVID-19 in India. However, despite the high number of cases, the government has received only 143 claims till date. The wide gap between the number of deaths and claims could be attributed to the fault lines in the scheme.

Solidarity with healthcare workers cannot be met with mere words of encouragement but by concerted efforts to strengthen the health workforce. A safety net for their families should be provided including a term insurance cover of over 2 crores, with the government as a sole guarantee.

On 8 August, the Indian Medical Association (IMA) wrote a letter to Prime Minister Narendra Modi highlighting the risks faced by healthcare workers. According to IMA data, over 2,000 doctors have been infected as of 27 August. Of this, 296 doctors have died in the line of duty.

IMA General Secretary Dr. R.V. Asokan told that the government and concerned authorities have not responded to the body’s letter to the PM demanding adequate care for doctors and extension of Rs 50 lakh compensation to both private and government doctors.

Following this, the body shot off another letter to the Prime Minister on 30 August, asking that doctors who have died due to COVID-19 be treated as “martyrs” and an “inclusive national solatium”, including compensation and jobs for next of kin, be announced.

The data from IMA reveals that over 40 percent of the doctors who have lost their lives have been general physicians. “While the Centre has equipped hospitals with PPEs, doctors who treat patients before the hospitalisation stage are not well protected,” said Dr. R V Asokan.

“According to the central government guidelines, PPEs for outpatient doctors (OPD) include only N95 masks and gloves. But most neighbourhood clinics are small and congested. Patients with fever sit and wait along with others. Masks and gloves are not enough. Triaging patients into fever and non-fever categories is also not done here and eventually, the healthcare workers also get infected in such a scenario.” he further added.

There are times when the public could offer a helping hand to doctors and other healthcare workers by adhering to the safety norms applicable to them. At times, patients tend to hide their exposure to COVID infected patients, their recent travel history, and other symptoms from doctors, causing a serious threat to the patients as well as physicians. The phrase, “Never lie to your doctor” becomes more relevant during these tough times as it could help protect our saviours to a certain extent.

The mortality and morbidity rate among healthcare workers continues to be on an upswing. The upward trend is indeed a matter of serious concern and we can’t let the entire healthcare workforce add to the rising tally at the cost of their lives. Protecting healthcare workers must be the first and foremost priority of the government in such a crisis situation if it intends to safeguard the lives of millions of its citizens.

Yes! We have discussed this matter many a time. But the discussion hasn’t yet produced the desired result. So it’s high time to discuss this matter ‘louder’ than ever before!