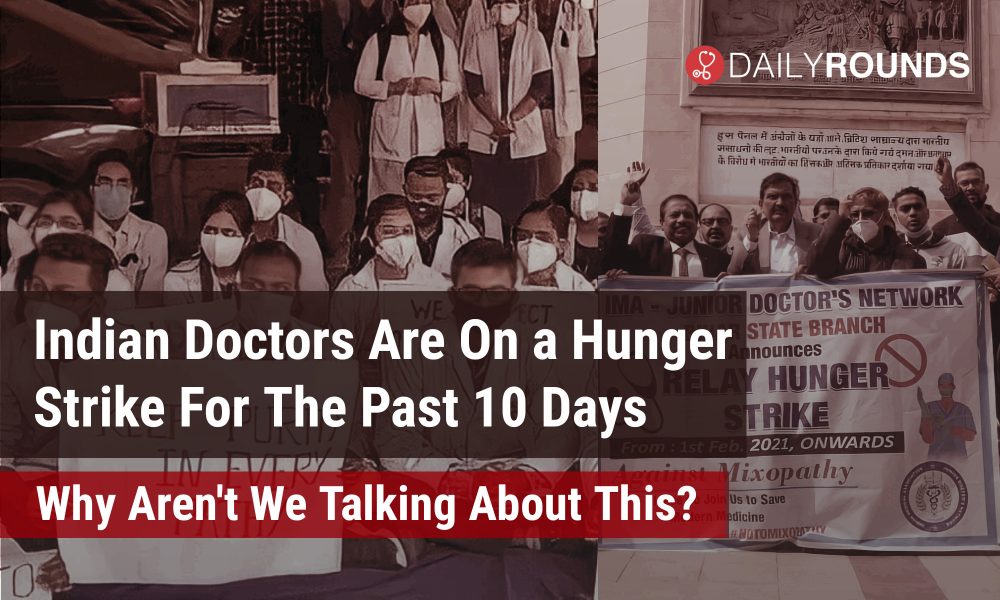 Indian Doctors Are On a Hunger Strike For The Past 10 Days: Why Aren’t We Talking About This?

After a lot of discussions, controversies, protests, and vigorous attempts to prevent ‘Mixopathy’ – the Centre’s move allowing post-graduate practitioners of Ayurveda to be trained in performing surgical procedures – doctors across the country decided enough is enough.

The Indian Medical Association, the umbrella body of doctors across the nation, along with several other medical associations took the protests to the next level, as it announced a pan-India relay hunger strike of doctors. The hunger strike which began on February 1 has entered the tenth day on Wednesday and will continue till February 14.

At a time when the whole world is praising doctors and healthcare workers for their indispensable efforts in tackling the pandemic, the doctors here in India are on a hunger strike for more than 10 days for the sake of the healthcare of people. Even then, why aren’t we talking about this? It’s high time to break the silence!

More than 1000 doctors at over 50 places across the country have been in a tussle with the Centre for the decision taken to allow post-graduate practitioners in specified streams of Ayurveda to be trained to perform general surgical procedures and against the formation of four committees by NITI-Aayog for the integration of all systems of medicines. Seems like the IMA was spot on in calling the protest ‘a freedom struggle of modern medicine from the forces of mixopathy’.

Appealing to the Centre to consider the anguish of the medical fraternity and the safety of the general public, the apex medical body has also launched a massive awareness drive as part of its ‘Save Healthcare India Movement. “IMA will fight this war for safeguarding the healthcare of our country. Now it is peoples’ war to save the quality and safety of our healthcare,” the association said in a statement. Meanwhile, the IMA has also released posters and banners to raise awareness on the issue across the country.

Apart from all this, the doctors are now taking up unique ways of protest as some of them are now cycling around the country to spread the word. On Sunday, around 50 doctors of the Indian Medical Association (IMA), Medicos United, and Resident Doctors Association(RDA) observed a ‘Cycle Rally’ from the National capital.

“The idea behind the cycle rally was to spread awareness among the public. I will also travel to remote places of the country to make people know about mixopathy and how it is harmful to them,” said Dr. Anil Nausaran, Pathologist, Medico Cyclist from Meerut. “This cycle rally will not end till the time CCIM withdraws the amendment notification,” added Dr. Nausaran, who started from Meerut on a cycle to reach Delhi and then cycled around Delhi.

In addition to this, all IMA members are asked to update their Members of Parliament and MLAs regarding the true picture of the notification and integration policy. The IMA will also give its rationale representations to all state governments. Under the Save People Movement, all NGOs will be updated with the core issues.

Internationally, the IMA shall apprise various associations from different countries about this unscientific notification, the statement said. The global voice of modern medicine shall echo the feelings of the Indian Medical Association and all its members, it added.

All specialty associations across the country have joined the strike through the Federation of Medical Associations under the aegis of IMA. The Dental Association has also joined the National movement. Further, Modern Medical Allied Health Organisations will also be joining IMA during the relay hunger strike in the coming days.

In a recent letter to the Minister of State, AYUSH ministry, the IMA put forward a set of questions regarding the CCIM notification. “Surgery is a complex procedure. It is never a straight-line course from start to end. There are additional surgeries and procedures which erupt during or post-surgery. Even in this era of modern gadgets of diagnosis, the abdomen being a Pandora’s Box, the surgeon often finds surprises on the table. If limited training and restricted license to do only limited procedures are given to AYUSH doctors what should they do if they come across a difficult diagnosis after opening the abdomen? Close the abdomen and refer back or continue with his untrained skill and bring catastrophe to the patients?” the IMA asked.

“IMA acknowledges that the Indian population needs different systems of medicine for different conditions of diseases and for promoting wellness. However, we strongly oppose the proposal to make a single doctor practicing all systems together as it will hamper quality and safety as he will lack in-depth knowledge on the particular system of medicine. IMA supports polypathy but not ‘mixopathy’ and kitchadification of healthcare systems,” said Dr. Jayesh Lele, IMA’s secretary-general.

What the IMA demands is the withdrawal of the CCIM order and dissolution of the NITI AAYOG committees for integration. The association appeals to the government to consider the sensitivity of the medical fraternity and take appropriate steps. However, a recent statement issued by the doctor’s body indicates that the association will be constrained to intensify the agitation until the steps towards implementing mixopathy are abandoned.

Commenting on the associations’ plans going forward, Dr. K Srinivasa, spokesperson for IMA Karnataka said that the struggle will be long-drawn, and if there is no response from the state or central government by February 14th, we will decide on methods to intensify the protest.

“We respect each and every pathy but this mixture of pathies together will result in causing danger to the life of citizens and for now our josh is high, and we will win this fight together,” said Dr. Manish Jangra, Founding Chairman of Federation of All India Medical Association (FAIMA).

Through these silent protests like hunger strikes and awareness campaigns, doctors want to let the people of the country know that they are battling against mixopathy for the safety of their countrymen. This surely is not a battle between two streams of doctors rather it’s a battle between healthcare and mixopathy and we can’t let the former lose this fight.

“It is a sin to be silent when it is your duty to protest.” ~ Abraham Lincoln