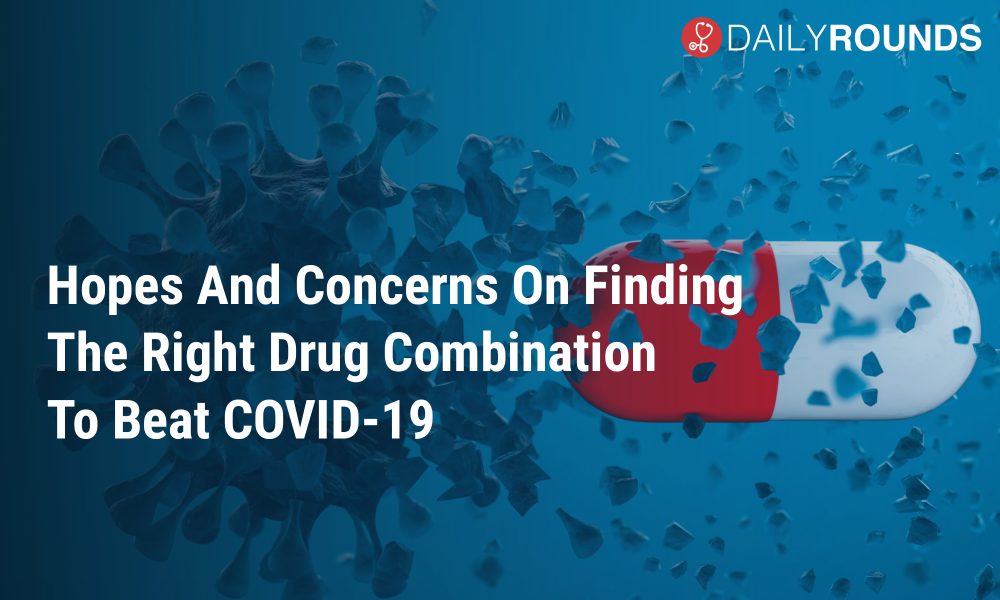 With COVID-19 cases surpassing 5.5 million and continuing to grow on a global scale, scientists and healthcare experts are pushing forward with efforts to develop vaccines and treatments to slow the pandemic and lessen the damage. The entire world is desperate for a safe and effective drug that could put an end to the dreaded journey of coronavirus pandemic that has already taken away the lives of 3,46,000 people across the globe.

Clinical trials of several promising treatments and vaccines are carried out on a full swing in different parts of the world at an unprecedented rate. However the mixed results from these clinical trials have brought both hopes and concerns to the world that is going through one of the toughest times in the history of mankind.

In the absence of a treatment or vaccine, one of the major drugs being repurposed to treat the ongoing COVID-19 is the anti-malarial drugs, hydroxychloroquine, and chloroquine. However, WHO has temporarily suspended the testing of this drug as a potential treatment for COVID-19 due to safety concerns following a study in The Lancet which raised further questions regarding the efficacy of the drug. On Friday, a study of 96,000 hospitalised patients in six continents published in The Lancet journal reported that those treated with the drug had a significantly higher risk of death compared with those who were not. The drug raised the risk of irregular heart rhythm (arrhythmia) that can lead to sudden cardiac death.

HCQ has been a matter of debate around the world for quite a while. It is India’s drug of choice for treatment as well as prophylaxis. The drug was prescribed to asymptomatic health workers and contacts of COVID-19 patients since March 23 and the cover was extended to frontline healthcare workers from May 22. The country accounts for 70 percent of the global production of hydroxychloroquine. India has also extended guidelines for its use and is currently exporting it to 55 other countries.

“As a prophylactic drug, the medicine has shown results in India, which is why it is advised to a larger group. The Lancet paper that came out will be having implications for treatment regimen, not prophylaxis” said an official from ICMR in response to the ongoing debates.

Remdesivir which initially went into trials for treating the deadly Ebola virus five years back has shown promise by modestly speeding recovery from COVID-19. The trial funded by the National Institute of Allergy and Infectious Diseases (NIAID) in the United States has found that the broad-spectrum investigational anti-viral drug, remdesivir can speed up recovery in COVID-19 patients requiring oxygen therapy,reported The New England Journal of Medicine.

Preliminary findings from the double-blind Adaptive COVID-19 Treatment Trial (ACTT-1) showed that the 538 patients randomly assigned to receive remdesivir had a median recovery time of 11 days, compared with 15 days in the 521 patients who received a placebo. The estimates of mortality by 14 days were 7.1% with remdesivir and 11.9% with placebo.

At present, the drug is under testing for specific treatment of COVID-19 and is considered as one of the most promising therapies against the disease. Six trials/studies involving remdesivir are currently underway, including the World Health Organization’s Solidarity Trial, under which it is likely to be used in Indian patients as well.

The experimental vaccine, mRNA-1273 produced by Moderna is the most advanced among 20 experimental nucleic acid vaccines against COVID-19 in various stages of clinical development that uses the mRNA platform to elicit an immune response against SARS-CoV-2, according to the World Health Organization. If approved, it will become the first mRNA vaccine against any disease in the world.

Earlier this week, Moderna announced that it’s experimental vaccine has produced virus-neutralising antibodies at levels similar to those found in recovered patients. Though the pharma company has several vaccines in the pipeline, Moderna has never brought a vaccine to the market till date.

Collaborating with British drug manufacturer AstraZeneca, the Serum Institute of India is working on manufacturing a vaccine developed by the University of Oxford. Following preclinical animal studies showing Oxford University’s ChAdOx1 nCoV-19 vaccine protected six monkeys from pneumonia, recruitment of around 10,260 adults and children has begun to assess the immune response to the vaccine across ages.

However, the recent reports reveal that the experimental vaccine has only a 50 percent chance of success, as stated by Adrian Hill, one of the professors heading the programme.

The preliminary finding of the test for the vaccine developed by CanSino Biologics has shown favourable results. As per the study published in The Lancet journal, the potential COVID-19 vaccine appeared safe and triggered an immune response in healthy adults in the early trials.

The early trials showed that the experimental vaccine, Ad5-nCoV, may help train the human body to resist infection by the news SARS-CoV-2. The study was conducted among 108 participants aged between 18 and 60 years with no history of coronavirus infection. It is the first-ever COVID-19 vaccine to be tested in humans.

Apart from this, several drug combinations are marching their way onto the healthcare spectrum to find a treatment or vaccine for COVID-19. The World Health Organization’s draft landscape of COVID-19 candidate vaccines suggests that many more drug combinations are likely to enter human trials in the upcoming days.

The clock is ticking and the virus is extending its fatality. Developing an effective drug combination is the only way to safeguard the entire human race. The scientists and healthcare experts across the world are working day and night to achieve this goal. All of us are uncertain of the fact that when this pandemic will end but it’s all a matter of time until we find the right drug combination!