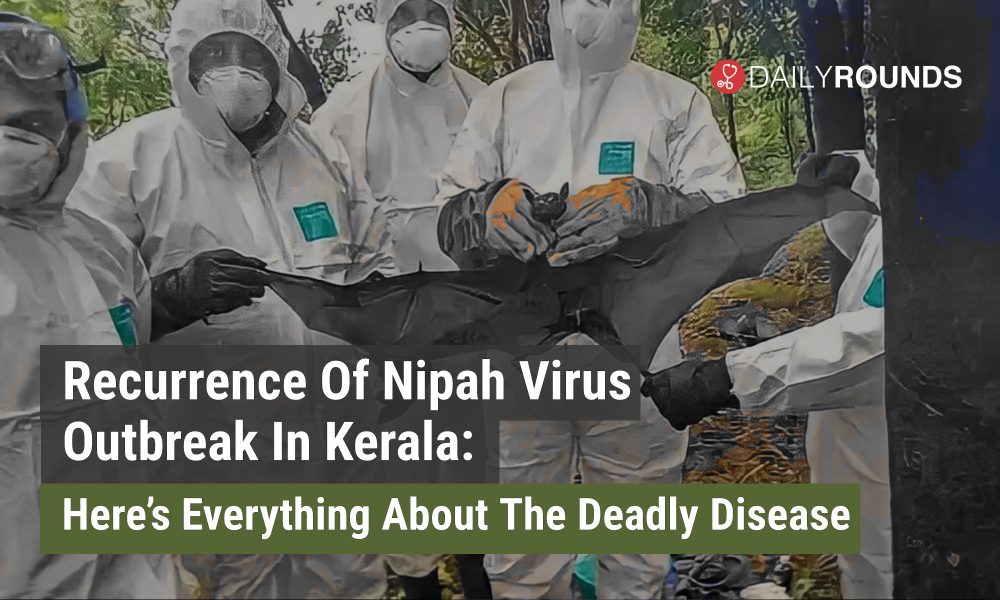 Recurrence Of Nipah Virus Outbreak In Kerala: Here’s Everything About The Deadly Disease

As Kerala continues to grapple with the Covid-19 pandemic, a new crisis has hit the state in the form of the Nipah virus. A 12-year-old boy succumbed to the virus in Kerala’s Kozhikode district on Sunday, the third time in four years.

Meanwhile, the state heaved a sigh of relief as the test results of those who came in close contact with the 12-year-old child who succumbed to Nipah virus infection returned negative in the last few days. However, the reoccurrence of the deadly disease has once again created panic among people around the country. Here’s everything about the Nipah virus, what it is, how it can spread, how deadly it is, and much more.

What is Nipah virus?

Nipah virus (NiV) is a zoonotic virus and can also be transmitted through contaminated food or directly between people. In infected people, it causes a range of illnesses from asymptomatic (subclinical) infection to acute respiratory illness and fatal encephalitis. Although Nipah virus has caused only a few known outbreaks in Asia, it infects a wide range of animals and causes severe disease and death in people, making it a public health concern.

The animal host reservoir for Nipah virus is the fruit bat (genus Pteropus), also known as the flying fox. The symptoms of Nipah virus infection range from mild to severe, with death occurring in 40%–70% of those infected in documented outbreaks between 1998 and 2018.

What are the Signs & Symptoms?

Some people can also experience atypical pneumonia and severe respiratory problems, including acute respiratory distress. Encephalitis and seizures occur in severe cases, progressing to coma within 24 to 48 hours. The incubation period is believed to range from 4 to 14 days. However, an incubation period as long as 45 days has also been reported. Most people who survive acute encephalitis make a full recovery, but long-term neurologic conditions have been reported in survivors.

What are the methods of diagnosis?

Initial signs and symptoms of Nipah virus infection are nonspecific, as a result, the diagnosis is often not suspected at the time of presentation. This can hinder accurate diagnosis and creates challenges in outbreak detection, effective and timely infection control measures, and outbreak response activities.

However, the Nipah virus infection can be diagnosed with clinical history during the acute and convalescent phase of the disease. The main tests used are real-time polymerase chain reaction (RT-PCR) from bodily fluids and antibody detection via enzyme-linked immunosorbent assay (ELISA). Other tests used include polymerase chain reaction (PCR) assay and virus isolation by cell culture.

Currently, there are no drugs or vaccines specific for Nipah virus infection although the WHO has identified Nipah as a priority disease for the Research and Development Blueprint. Intensive supportive care is recommended to treat severe respiratory and neurologic complications.

The current situation in Kerala

According to the state health department, none of the contacts of the 12-year-old boy who died of Nipah virus have been tested positive. As many as 61 people have undergone the test for the virus till date. “It is a great relief that all samples turned negative so far. But we will not lower our guard. All restrictions will be in force till the window period of the virus (3 weeks) is over,” the state health minister said.

This is not the first time that Kerala is facing the heat of the Nipah outbreak. Three years ago, the virus had hit the districts of Kozhikode and Malappuram, and at one point, around 3,000 people were under quarantine. The infection claimed 17 lives in Kozhikode during that period.

According to the World Health Organization, this was the first Nipah virus outbreak in South India. Two previous outbreaks were witnessed in West Bengal’s Siliguri (2001) and Nadia (2007) districts. In 2019, a case had been reported in Kerala’s Ernakulam district, but it did not lead to any more cases or deaths.

In the history of Nipah from the ’90s, there are about 25 outbreaks worldwide, of which the last three are from Kerala which is a matter of concern. Health experts say that in Kerala they can pick up the cases very early during the outbreak itself and the State is doing well in containing the situation but right now there need to be extensive studies on why the State is having recurrent outbreaks.

The recurrence of infectious diseases such as Nipah certainly points towards the need to strengthen the disease surveillance network in not only the state of Kerala but also the whole country to prevent future outbreaks. An active disease surveillance mechanism is the need of the hour to identify the onset of an outbreak thereby minimising the damage.