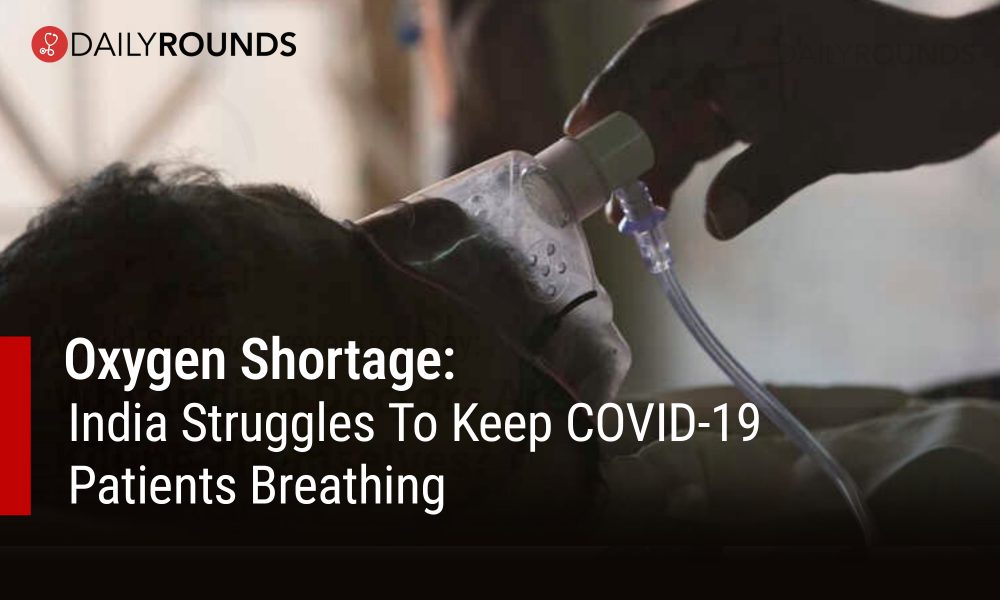 As COVID-19 cases continue to surge across India, the nation is facing a shortage in numerous aspects – from hospital beds to human resources. With the country reporting over 90,000 cases on a daily basis in the past few days, here’s a new addition to the ‘shortage list’- the medical oxygen!

As oxygen therapy became critical in the nation’s fight against coronavirus, the country is having a tough time in making the supply meet the ever-growing demand. The shortages of medical oxygen are becoming increasingly apparent in various states across India. Here’s a look at how these shortfalls can pose severe challenges to India’s fight against COVID-19.

In a smaller subset of patients, the COVID-19 shows a drop in oxygen levels, which is insidious and precipitous. This is known by the term ‘happy hypoxia’, where people seem visibly fine one moment, but the very next moment, they may just collapse. This is where the oxygen therapy and medical oxygen comes into action. The World Health Organization recommends supplemental oxygen therapy immediately for COVID patients with respiratory distress, hypoxaemia, or shock with a target SpO2 > 94%.

On the first day of the monsoon session of Parliament, health minister Dr. Harsh Vardhan reported that till now, oxygen therapy was required for 5.8 percent of the total reported cases in India, while intensive care was required in 1.7 percent cases. Earlier, the AIIMS director Dr. Randeep Guleria also cited oxygen therapy and the use of steroids as the two COVID-19 treatment methods that appear to be working.

Currently, there are several mechanisms that are used to supply medical oxygen. In places that have better-developed health infrastructure, liquid oxygen is filled into large tanks built into the ground and then supplied through a network of pipelines to the patient’s bed. However, this requires a network of pipelines for this purpose, which is often not available in small towns and rural areas and cannot be constructed in a short span of time. In such areas, medical facilities rely on either ‘jumbo’ oxygen cylinders or smaller ones which can be used for individual patients.

A recent guideline by the National Health Mission notes several challenges in the use of oxygen cylinders but states that this is the most adaptable method in short-term and emergencies. It states that piped supply to hospitals is a “far better, cheaper, safer method than supply through cylinders”, but adds that it needs infrastructure such as pipelines and a storage tank. Regarding oxygen cylinders, the guideline states, “It is a labour intensive, logistically challenging, unsafe, unhygienic (chances of carrying infection from the hospital) and expensive method.”

Considering the ongoing scenario it is no surprise that the demand for medical oxygen has shot up. According to a recent BBC report, hospitals and care centres were consuming up to 1,300 tonnes of oxygen every day, compared to 900 tonnes per day before the pandemic. At present, with the country reporting even more cases per day, the demand is likely to be even higher. Today, the industry is supplying 2,700 tonnes of medical oxygen per day — almost four times what it was supplying six months ago. But ensuring the adequate supply of oxygen still remains a steep task, particularly in rural areas, where health infrastructure is weaker.

Over the last few weeks, Madhya Pradesh, Gujarat, and Mumbai among others have all reported the shortage of medical oxygen on a drastic scale. Across the country, there have been several instances where low or delayed oxygen supply may have contributed to coronavirus patients’ deaths, according to media reports.

Four patients died at a hospital in Madhya Pradesh’s Dewas last week following a shortage of oxygen cylinders. This was after neighbouring Maharashtra limited the supply of oxygen to Madhya Pradesh. The report quoted a medical officer as saying that the deaths were not due to a delayed oxygen supply. The official, however, claimed that there was ‘miscommunication’ while loading cylinders headed for the district from Bhopal, which may have caused a crisis.

Like Madhya Pradesh, many other states also depend upon production units outside the state to meet their oxygen demands. These states are now feeling the heat as some states have tried to prevent oxygen from being moved outside their borders as part of their efforts to meet the domestic needs. The recent order by the Maharashtra government under the disaster management law seeks to prohibit the movement of oxygen out of the state. This eventually led to a drastic shortage of oxygen supply in states like Madya Pradesh and Karnataka. The issue certainly forced the Union health ministry to issue a letter asking states not to restrict the movement of medical oxygen but even then the shortage continues in many states.

Issues related to oxygen supply is not a fresh chapter for the nation. Memories are still fresh of August 2017 when some 70 children died in a government hospital in northern Uttar Pradesh state after the oxygen supplier cut off shipments because his bills went unpaid. This certainly shows that ensuring adequate oxygen supply has always been a challenge for the administrations irrespective of the conditions.

Medical oxygen and its supply is a vitally important matter in the present healthcare context. Concerned authorities and administrators should open their eyes to the crisis for taking effective steps to ensure the availability of oxygen in healthcare facilities. The success and failure of these efforts will determine how many lives of critically ill patients can be saved, and how the country can tide over the pandemic!