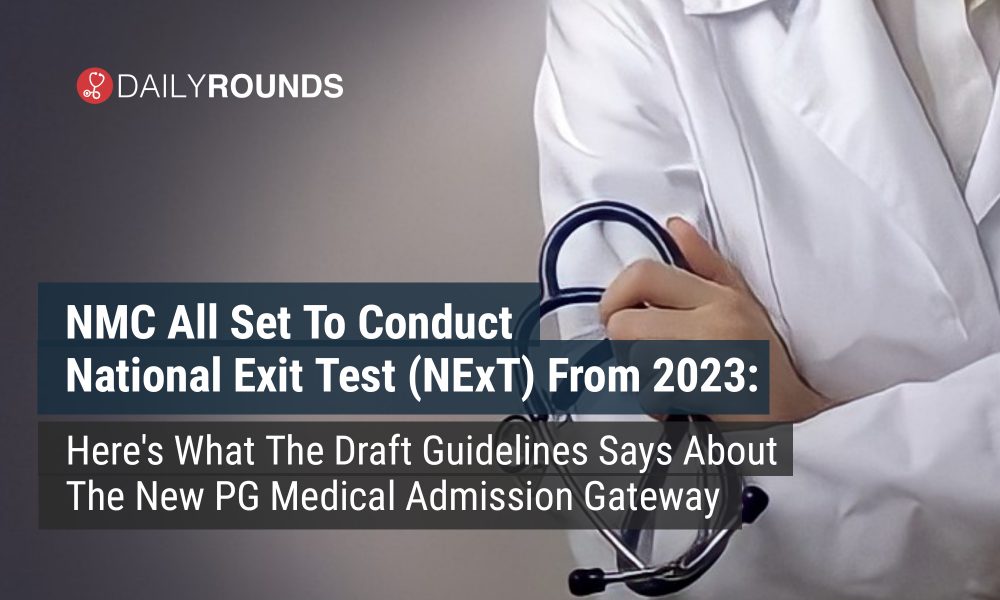 NMC All Set To Conduct National Exit Test (NExT) From 2023: Here’s What The Draft Guidelines Says About The New PG Medical Admission Gateway

With several speculations surrounding the conduct of the National Exit Test (NExT), the medicos have been waiting for official clarification for a long time. The uncertainty is finally over and the framework for NExT is here. The National Medical Commission (NMC) in its recently issued draft of ‘The Postgraduate Medical Education Regulations, 2021’ has mentioned that the National Exit Test is soon going to be the gateway for PG medical admissions across the country in each academic year.

The NExT, a common exit exam envisaged by the government to standardize medical education across the country, was proposed by NMC as a part of the bill passed in 2019. The exam is set to replace the NEET PG and FMGE exams. Efforts are underway to ensure that the NExT is conducted in the first half of 2023, as per the roadmap presented by the union health ministry last week. However, until its implementation, NEET-PG shall continue to operate as the screening test for the selection of postgraduate students to speciality courses.

The NExT exam would not only serve as a gateway to admission to the postgraduate broad-specialty medical education in the country but would also serve as a licentiate exam for those who have done MBBS in India as well as abroad. The designated authority to conduct the ‘NExT’ shall be as specified by the National Medical Commission.

In order to test the procedure and remove anxiety among medical students, a mock run is also being planned and will be conducted in 2022, said the NMC officials. While addressing a review meeting with the National Medical Commission, Union Health minister Mansukh Mandaviya emphasised that the Government of India is committed to creating quality medical education and transparent examination infrastructure and health services and is relentlessly working with all stakeholders to achieve this objective.

Ways to make NExT an examination of the world-class standard were also discussed and deliberated during the meeting. The importance of the NExT exam lies in the fact that it will be the same for everyone whether trained in India or any part of the world and hence it will solve the problem of foreign medical graduates, the officials added.

However, various state medical education experts and fraternities have expressed apprehensions over NExT replacing MBBS final exams and say the move may prove detrimental to the state’s efforts to have more doctors available. “We have serious apprehensions if so many students will be able to clear NExT every year. Moreover, MBBS finals are held twice a year while NExT will be held only once,” said a senior medical fraternity member from Gujarat.

Similarly, the Tamil Nadu government on Saturday strongly objected to the Draft of Post Graduate Medical Education Regulations released by the NMC, saying they intend to undermine the role of the states in this domain.

The draft regulation, however, is currently placed in the public domain for comments. It is still under review and the comments, if any, should be submitted to the NMC by email at president.pgmeb@nmc.org.in before 30th August 2021.