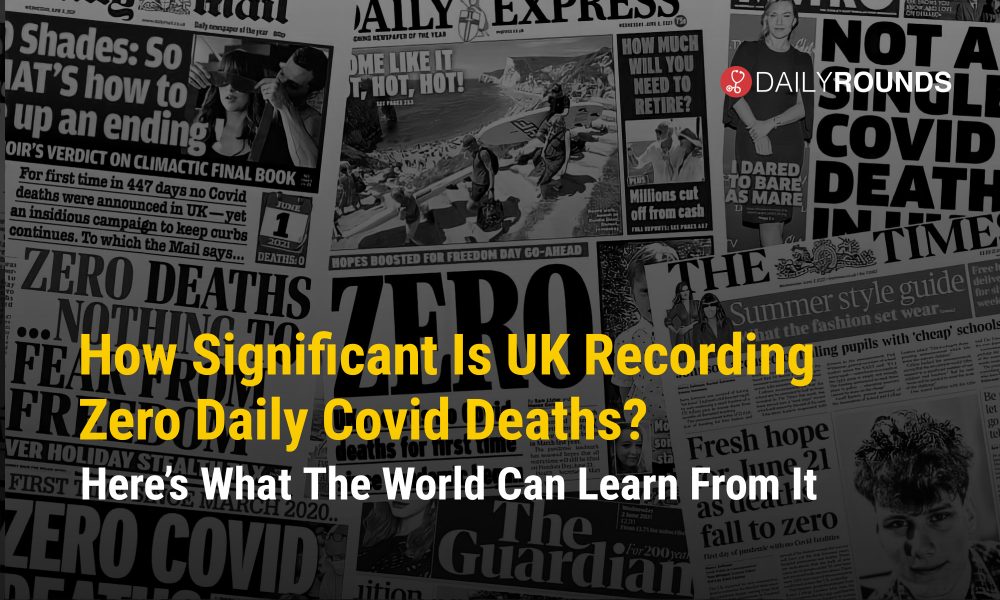 How Significant Is UK Recording Zero Daily Covid Deaths? Here’s What The World Can Learn From It

The UK’s daily death rate, the number of people being admitted to hospital, and those catching the virus have fallen from a peak reached in January. In fact, on Tuesday the country recorded zero daily Covid deaths for the first time since March 2020.

At a time when other countries around the globe are drained with the covid mortality figures, what helped these countries to record a day without Covid deaths? Does it mean that the pandemic is coming to an end in these countries? Let’s look into it in detail

A day without Covid deaths! It certainly sounds like a milestone worth celebrating and something we have all been waiting for. But if there is one thing we have learned about tracking coronavirus, it is that any figures that accompany it come with caveats.

However, in the last three months, death rates, the numbers of people being admitted to hospital and catching the virus have all fallen steadily in both these countries. It’s no coincidence that this comes against the backdrop of the increasing numbers of people receiving the first or second dose of a vaccine.

The rollout has expanded in the UK after the government hit its target of offering the first jab to everyone in the top priority groups – all those over the age of 50, plus those in high-risk categories – before 15 April. These groups account for 99% of coronavirus deaths so far.

The government plans to vaccinate the rest of the adult population in age order, another 21 million people, by the end of July. Further, the delivery of second doses to over 50s in England has been accelerated in response to the emergence of the Indian variant of the virus.

The latest data from the UK government – based on evidence from the rollout – suggests one dose of the Pfizer-BioNTech or Oxford-AstraZeneca vaccine cuts the risk of infection by as much as 70% and death by even more. Data on their effectiveness after two doses is only just emerging – but, as expected, it suggests this level of protection is boosted even further. For Pfizer, which was rolled out first, the risk of death is reduced by 97%.

Public Health England has estimated that 13,200 deaths have been averted in people aged 60 years or older in England up to 13 May 2021, as a direct effect of being vaccinated. In fact, the impact is so good it raises the prospect of the UK reaching the herd-immunity threshold.

However, the success of the UK’s vaccination programme does not mean that the battle with Covid is over, a scientist advising the government has said. Prof Adam Finn, a member of the British Department of Health Joint Committee on Vaccination and Immunisation, said the country remained vulnerable as there were still large numbers of unvaccinated people.

It is certainly clear that vaccines are having a significant impact in reducing hospitalisations and deaths in the UK. The fast rollout and good uptake of the vaccines have played their part in marking a day without a single Covid death in the country. The pandemic is far from over, but reports of countries recording zero Covid deaths is indeed a piece of promising news. Let’s hope that we’ll see more like this in the near future.