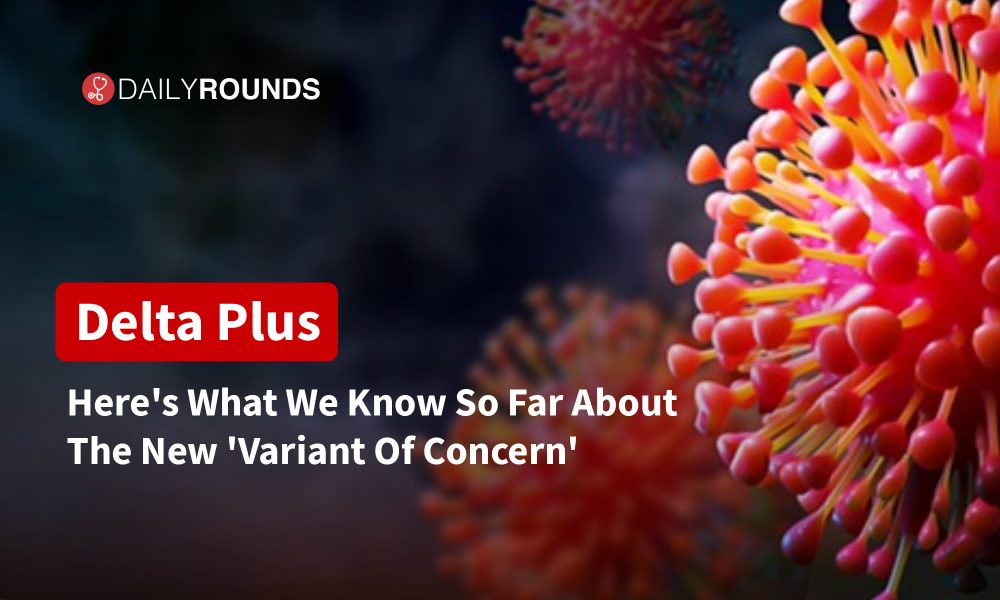 Delta Plus: Here’s What We Know So Far About The New ‘Variant Of Concern’

Ever since the coronavirus first hit the world, the virus has been constantly transforming. Just as India was breathing a sigh of relief that the second wave is nearly over, experts have identified another mutant— the Delta Plus. The new mutant version of the Delta strain of Covid has now been seen as a virulent type. Labeled as a “variant of concern” by the Union Ministry of Health and Family Welfare (MoHFW), people have been warned against it. Here’s what we know so far about the new variant.

What is Delta Plus?

The variant, called “Delta Plus” in India, was first reported in a Public Health England bulletin on June 11. It is a sub-lineage of the Delta variant first detected in India and has acquired the spike protein mutation called K417N which is also found in the Beta variant first identified in South Africa.

“The mutation K417N has been of interest as it is present in the Beta variant (B.1.351 lineage), which was reported to have immune evasion property,” India’s health ministry said in a recent statement. A study done by researchers at Rockefeller University shows K417N was among three mutations that lowered the potency of key antibodies produced after using mRNA-developed vaccines.

Where has it been found?

Cases of the new Delta Plus variant have started to surface in Maharashtra, Kerala, and Madhya Pradesh. The health ministry has advised these three states to ramp up containment measures in the affected districts. Additionally, the new mutant has also been detected in Punjab, Tamil Nadu, Jammu Kashmir and Andhra Pradesh. Madhya Pradesh has also reported the first Delta Plus death on Thursday. Apart from India, the Delta Plus variant has been detected in around 11 countries including the US, UK, Portugal, Switzerland, Japan, Nepal, Poland, China and Russia.

What are the concerns?

Based on the recent findings of Indian SARS-CoV-2 Genomic Consortia (INSACOG), the Union Health Ministry on Tuesday alerted and advised Maharashtra, Kerala and Madhya Pradesh regarding the Delta Plus variant of covid-19 being found in some districts in these States. The Centre has asked these States to step up containment, testing and tracking of cases. It has also asked the states to send more samples promptly for genome sequencing on INSACOG labs.

INSACOG has informed that the Delta Plus Variant, currently a Variant of Concern (VOC), has the characteristics such as increased transmissibility, stronger binding to receptors of lung cells and potential reduction in monoclonal antibody response.

However, the World Health Organization (WHO) in a recent statement said that “we are tracking this variant as part of the Delta variant, as we are doing for other Variants of Concern with additional mutations. “For the moment, this variant does not seem to be common, currently accounting for only a small fraction of the Delta sequences … Delta and other circulating Variants of Concern remain a higher public health risk as they have demonstrated increases in transmission,” it said.

Although, health professionals and experts have addressed their concern and fear that the new variant may trigger a possible third wave. However, there’s no data that can prove the potential effect this new variant can have in the near future on India’s fight against Covid-19.

Are vaccines effective against the Delta Plus variant?

Experts say it is too early to predict the effectiveness of the existing vaccines on the new variant. Meanwhile, studies are ongoing in India and globally to test the effectiveness of vaccines against this mutation. Experts from the Indian Council of Medical Research (ICMR) are currently examining how effective vaccines available in the country are against the Delta-plus variant of SARS-CoV-2.

Dr. Samiran Panda, an ICMR scientist, said the research body is closely monitoring the neutralisation capabilities of antibodies drawn from vaccine recipients. He said the results of the investigations should be out in the next few weeks. We are examining virus samples drawn from various locations to see if they get neutralised by serum from Covid-19 vaccine recipients,” he said. He added that states should implement strict containment around infection clusters involving Delta-plus, continue to quarantine contacts and improve the pace of vaccination in regions reporting the variant.

One of India’s top virologists and a former member of the Indian SARS-CoV-2 Genomic Consortia (INSACOG), Professor Shahid Jameel, expressed concerns regarding the Delta plus variant earlier this week. He said that the new mutant variant may just be capable of dodging immunities, both from Covid-19 vaccines as well as from earlier infections. This is because the Delta plus variant not only has all the symptoms that the original Delta variant had, but also carries symptoms from its partner Beta variant (K417N mutation), Professor Jameel explained.

AIIMS director Dr. Randeep Guleria last week said that the delta plus variant of coronavirus may affect the efficacy of the COVID-19 vaccines available in the country but they will still be effective against the variant. However, a detailed study would be required to establish any effect of the mutant on the immune system.

The emergence of the Delta plus variant, has once again put India, and by extension the world, in a state of high alert. The new variant is certainly ringing an alarm over the need to avoid large gatherings and maintain Covid appropriate behaviour. Once again, it’s time to ensure that we don’t let our guard down.