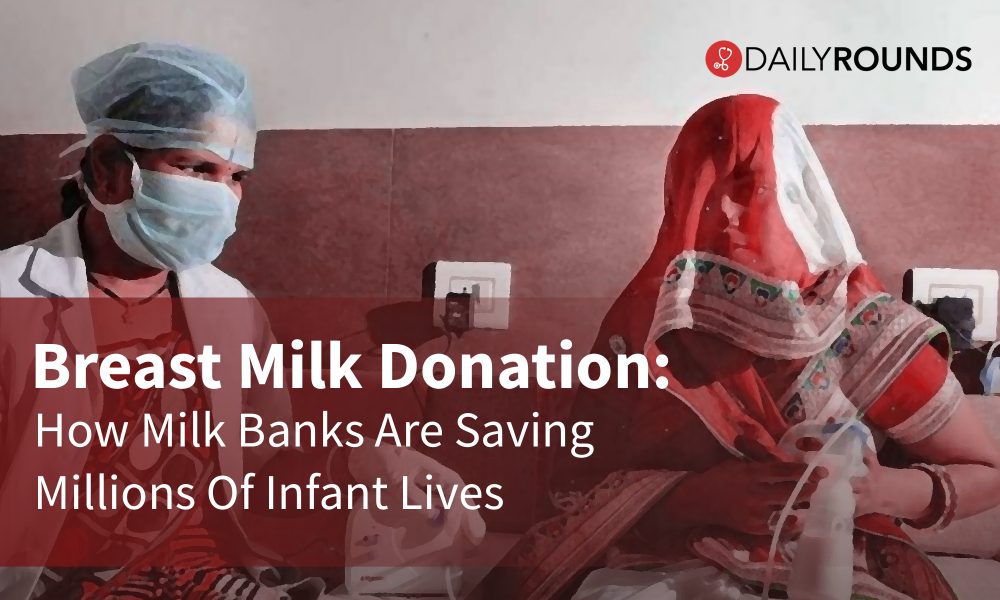 Breast milk is indispensable for neonatal care. It plays a crucial role in the overall development and immunity-boosting skills of the newborn. Possibly that’s the reason medical doctors steered that an ailing child admitted in Delhi hospital wanted breast milk despite the fact that they have been feeding the newborn with formula milk.

Born on June 16, the child was just two days old when he was brought to Delhi for treatment of tracheoesophageal fistula with esophageal atresia. The condition, though not uncommon, needs surgical intervention within 48 hours of birth. The lack of facility in their hometown in Leh prompted the family to bring the child to a hospital in Delhi, but the mother couldn’t accompany them due to a C-section delivery and travel restrictions imposed by the COVID-19. The child made a quick recovery soon after the treatment, but the only thing that was missing was the mother’s breast milk. However, since the child wanted breast milk for immunity and swift recovery, bottled breast milk from the mother flew 1000 Kilometres from Leh to Delhi via airplane on a daily basis for over three weeks.

Apart from showing the importance of breast milk this distinctive incident also throws light on the scope of human milk banks, an alternate option for providing infants with mothers milk in such problematic situations. All mothers want to nurse their baby, but unfortunately, some mothers find it challenging to breastfeed their babies either because of low milk production or because of health-related issues. That’s where the Human Milk Bank comes in.

What is a Human Milk Bank?

The human milk bank is a service attached to hospitals or nursing homes where breast milk is collected, screened, and stored from healthy lactating mothers (who willfully donate the milk) to meet the nutritional requirements of babies who are not biologically related to them.

When will it help?

One can consider opting for a donors breast milk in the following situations:

According to the Human Milk Banking Guidelines published by the Indian Pediatrics, breast milk can be donated by:

Breast milk cannot be donated by:

There is a detailed process involved in becoming a breast milk donor and donating milk. The entire process takes about 3-4 weeks and a great deal of care and attention is involved in the process. So there’s nothing much to worry while opting for donated milk from non-profit milk banks.

How does donating help mother and baby?

Donating breast milk helps prevent breast engorgement. Since engorgement makes the breasts firm and swollen, it makes it difficult for the baby to breastfeed properly. Engorgement happens when a mother produces more milk than her baby drinks. In such cases, donating excess milk not only gives relief from pain but also helps save the lives of many needy babies.

Fast forward 30 years from the launch of the first milk bank in the country, India doesn’t have an appropriate number of human milk banks for donating breast milk and to feed its huge number of infants with preterm births. A recent study, landscape analysis of human milk banks in India, reports the gaps of milk banking practices in the country, which need to be addressed for strengthening them. Gaps include sub-optimal financial support from the government, shortage of key human resources, processes and data gaps, and demand-supply gap of donor human milk.

Given the high infant mortality rate, wherever there is a neonatal intensive care unit, be it district, be it the city, there is an absolute need for a human milk bank with a sufficient number of adequately-sized units to high-quality facilities to encourage mothers to come in and donate their milk.

A Network of Human Milk Banks

At the 11th BRICS summit held recently in Brazil, India along with Russia, China, and South Africa agreed to establish a BRICS Network of human milk banks. This can be seen as an opportune development as the government of India plans to ensure that at least 70% of infants in the country have access to breast milk by the end of 2025.

There is already a similar established network in Europe. The European Milk Bank Association has more than 200 milk banks operating across 20 countries. The impact of such a network could be far-reaching, especially for a developing country like India as it would not only help in saving thousands of newborn lives but also will help the nation to attain sustainable development goals.

As it is with a lot of services, the pandemic has brought its own set of difficulties in the procurement of donated breast milk as well. However, it has also highlighted the importance of breast milk banks as most of the hospitals in the containment zones separate the newborn from the mother until they test negative for COVID-19 to ensure that the newborns are not infected. During this period, the babies are fed with milk from the human milk bank at the hospitals.

The available data shows that coronavirus does not spread through breast milk. But as a precaution, it is always best for the mother to cover her face with a mask and use gloves while pumping and handling the packets during the donation of breast milk. A recent study published in the Canadian Medical Association Journal (CMAJ) says that pasteurising the donor milk at 62.5 degrees Celsius for 30 minutes inactivates the SARS-CoV-2 virus that causes COVID-19, making it safe for consumption by babies.

There are so many myths surrounding milk banking, donation, and the use of donor breast milk. It was recently that a hospital in Bangladesh suspended its plans to give donated breast milk to needy infants after a backlash by clerics who said that the scheme violated religious laws. Similarly, feeding the infant with milk from another mother is still hard to digest for many people from across the globe. However, they are quite okay in feeding the baby with milk from another species!