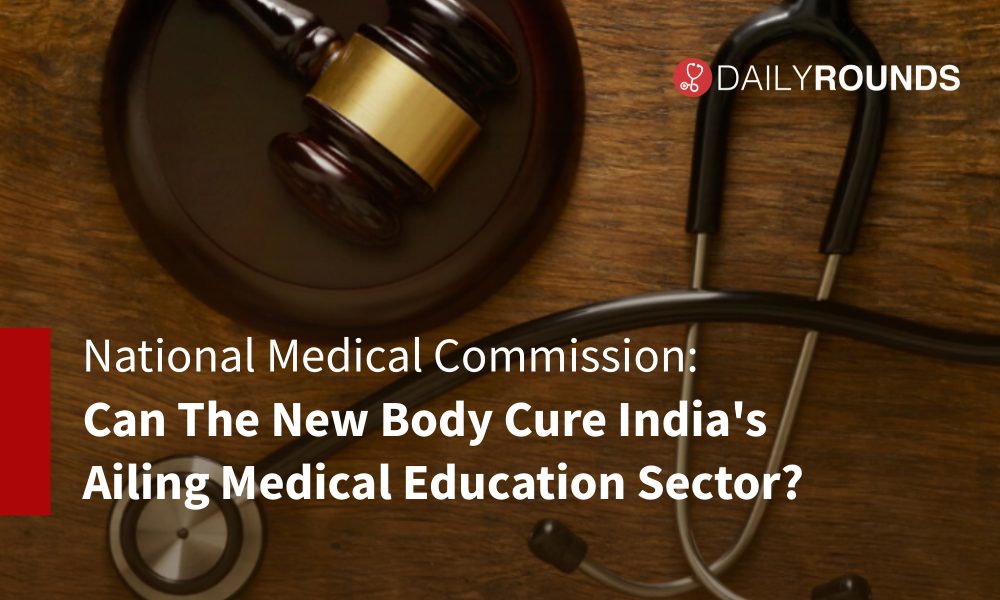 Described as one of the biggest reforms for medical education in the country, the National Medical Commission (NMC) has come into existence from September 25 as the apex regulator of medical education and profession in India. With the NMC coming into being, the Board of Governors (BoG) which superseded the MCI on September 26, 2018, to perform its functions, has been dissolved and the nearly 64-year-old Indian Medical Council Act gets abolished.

Speaking on the Bill, Union Health and Family Welfare Minister Dr. Harsh Vardhan said the legislation would go down in history as one of the best reforms ending ‘inspector raj’ in medical education. The NMC, with a new set of frameworks, aims to usher in major changes in the medical education sector. Let’s examine the relevance, provisions, and implications of this newly constituted medical regulatory body.

The formation of the National Medical Commission is considered as a step towards improving governance and introducing reforms with the potential to create an enabling environment, and facilitate standardisation in processes and transparency in the functioning of the health sector.

The formation of NMC seeks to rectify some of the fundamental issues in India’s healthcare scenario such as:

The Medical Council of India, the former medical regulating body in the country has faced serious corruption scandals. In addition to this, the MCI was also alleged of promoting Inspector Raj (the inspections carried out by the MCI to ensure the maintenance of required standards by medical colleges) and the malpractices linked with it. It is in this context that the NMC Act replaces scam-tainted MCI with the National Medical Commission.

The healthcare system in India is among the most privatized systems in the world, where most qualified doctors tend to serve in the urban areas, whereas rural areas are at the mercy of poorly functional public healthcare systems. In order to rectify this, the NMC may grant limited licence to practice medicine at mid-level as Community Health Provider to such persons connected with a modern scientific medical profession who qualify such criteria as may be specified by the regulations. These Community Health Providers are expected to bridge the shortages of medical professionals in rural areas. However, this provision has raised serious concerns among the medical fraternity and rightly so!

The democratisation of medical education is very important as it is becoming more expensive with every passing year. With the rising fees, expensive books and equipment become a barrier for several deserving students. According to the Act, NMC will determine fees for 50% of the seats in private medical colleges and deemed universities. This move will broaden the opportunity for students from all sections of society to undertake medical education.

The NMC Act, 2019 provides for National Exit Test (NEXT) for granting a licence to practise medicine and enrolment in the State Register or the National Register, which shall also be the basis for admission to postgraduate broad-speciality education in medical institutions.

Further, the Bill introduces a common final year undergraduate examination called the National Exit Test for students graduating from medical institutions to obtain the license for the practice.  This test will also serve as the basis for admission into post-graduate courses at medical institutions under this Bill.  Foreign medical practitioners may be permitted temporary registration to practice in India.

The major functions of NMC include but are not limited to:

The Bill sets up four autonomous boards under the supervision of the NMC. Each board will consist of a President and four members, appointed by the central government. These bodies are:

These two bodies will be responsible for formulating standards, curriculum, guidelines for medical education, and granting recognition to medical qualifications at the under-graduate and post-graduate levels respectively.

3. The Medical Assessment and Rating Board:

The Board will have the power to levy monetary penalties on institutions that fail to maintain the minimum standards as laid down by the UGMEB and the PGMEB.  It will also grant permission for establishing new medical colleges, starting postgraduate courses, and increasing the number of seats in a medical college.

4. The Ethics and Medical Registration Board:

The tenure of the regulatory body will be four years. Unlike MCI, which is used to meet once a year, the National Medical Commission will meet every quarter. The NMC board members will also have to declare their assets and liabilities at the time of entering and demitting office.

The former head of the AIIMS ENT department, Dr. Suresh Chandra Sharma has been appointed as the chairman of the commission for a period of three years, while Rakesh Kumar Vats, who was the Secretary-General in the Board of Governors of the MCI, will take up the role of the secretary.

Ever since the introduction of the NMC, there are some major concerns revolving around the provisions of the bill. Which includes:

The NMC Act proposed to set up a “Medical Assessment and Rating Board” to hire and authorise any other third-party agency or persons for carrying out inspections of medical institutions for assessing and rating their standards. The authenticity of quality audits by such private third-party agencies can be questioned.

The Act provides NMC as a complete subsidiary of the government. From the selection of its office-bearers and members to its finances, its functioning and powers, all being comprehensively controlled by the government. This absolute control of the government on the NMC threatens its autonomy.

The Act is silent on the method by which the “commission” will grant “limited licence” to community health providers to practise modern medicine. The absence of clarity on this front may allow some unqualified personnel to perform the duties of a medical practitioner. The medical fraternities and organisations like IMA were opposing this section of the bill, when it was passed in the Rajya Sabha in August 2019, saying it will encourage quackery by providing the licence to practice modern medicine as community health providers for persons other than those possessing MBBS degrees.

The formation of NMC has given rise to mixed feelings among the medical fraternity. While some of the policymakers welcomed the decision some others are concerned about various provisions in the bill and its future implications. “On 25 September 2020, when the MCI was officially dissolved, was a historic day for Indian medical education. It was a culmination of the efforts of the government over the past four years,” said Amitabh Kant, CEO of NITI Aayog.

Kant, one of the officials backing the replacement of MCI, said that medical education had left much to be desired with MCI at the helm. However, some others within the community fear that the NMC would lead to a deterioration in medical education and the degradation of healthcare services.

Well, we can’t come to a conclusion by just looking at the provisions of the bill. We will certainly have to wait and watch the functions and strategies of the newly constituted body. But one thing is for sure, holistic governance reforms in the medical education sector are the need of the hour, so as to instil the medical ethos of transparency, equity, and accountability.