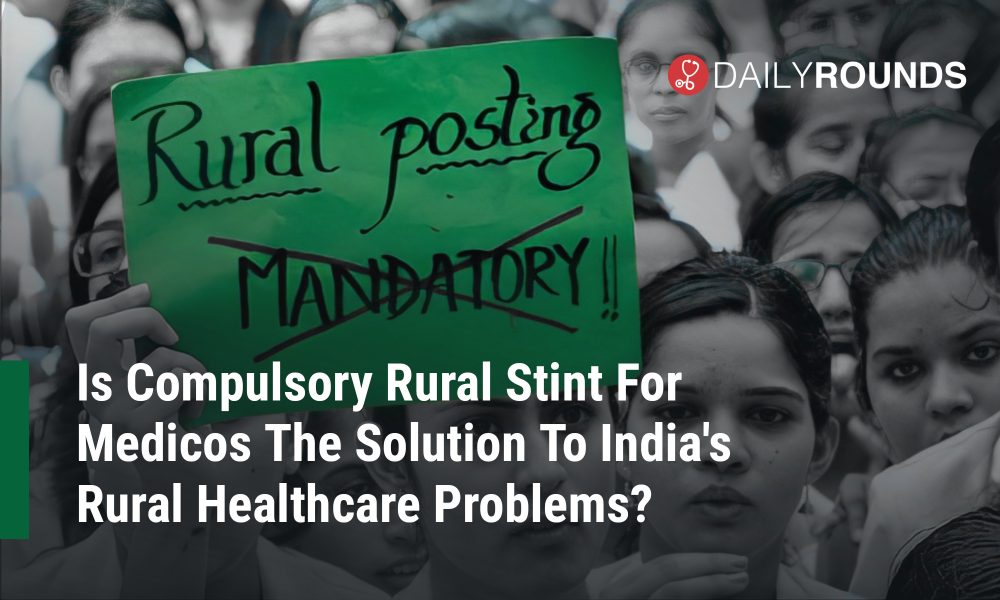 Is Compulsory Rural Stint For Medicos The Solution To India’s Rural Healthcare Problems?

The Indian healthcare scenario presents a spectrum of contrasting landscapes. At one end of the spectrum are the glitzy huge structures delivering high-tech medicare. At the other end are the ramshackle outposts in the remote reaches trying desperately to live up to their identity as health centres.

The healthcare crisis in rural India is not a new chapter, in fact, it has been there for ages. However, in an attempt to fix the healthcare services in these parts of the country, the Parliamentary committee has now recommended the Department of Health and Family Welfare for the compulsory posting of doctors passing MBBS in the rural areas for three years. It also suggested that practitioners violating the rule may be de-registered and banned from undergoing medical practices for the deregistered period.

Compulsory rural service for medicos has been used as a tool, rather the only tool, to combat the rural health crisis. In August 2019, the Supreme Court of India upheld the compulsory bond condition imposed by states for students taking admission in PG and speciality courses in government medical colleges and asked the Centre to frame a policy to make it mandatory for them to serve in public hospitals in rural areas for a certain period after passing out.

So far states like Karnataka, Andhra Pradesh, Goa, Gujarat, Himachal Pradesh, Kerala, Maharashtra, Odisha, Rajasthan, Tamil Nadu, Telangana, and West Bengal have imposed provision for compulsory rural service. However, if the recent recommendation from the parliamentary committee gets a green light, a lot more States will be added to the list.

A question remains unanswered amidst all this. Is this the only way to address the shortage of doctors that rural India continues to face even 74 years after independence? It’s certain that the problems faced by rural India in accessing healthcare services couldn’t simply be solved by making scapegoats of young medical students but by confronting the real issues like lack of infrastructure, specialities, and basic facilities. Even the parliamentary committee recommends that all basic facilities must be provided to the doctors posted in rural areas viz. marketing centres, quality educational institutions and recreational avenues.

The rural healthcare sector has been facing a plethora of challenges and needs focused policy-level interventions. In India, 75% of the healthcare infrastructure is concentrated in urban areas where only 27% of the total Indian population is living. The remaining 73% of the country’s population is lacking proper primary healthcare facilities.

The under-staffed rural healthcare facilities in India can surely be attributed to poor infrastructural facilities, lack of medical equipment, non-availability of basic drugs, transportation and communication problems, and lack of amenities in rural parts of the country. As per data, only 11% of sub-centres, 13% of Primary Health Centres (PHCs), and 16% of Community Health Centres (CHCs) in rural India meet the Indian Public Health Standards (IPHS).

The existing Nurse to Doctor ratio also contributes to the inadequacy of the rural healthcare system. Every doctor needs a nurse to cater to their patients, which is often unavailable in the remote areas of the country. You surely can’t expect a doctor to be a single-man army to look after all the healthcare needs of the people.

Apart from this, awareness about proper healthcare is insufficient in rural India. The population needs to be educated appropriately on basic issues like the importance of sanitation, health, nutrition, hygiene, and on healthcare policies, the importance of medical services, their rights, financial support options, etc. It’s very important to inculcate health-seeking behaviour among the rural population of the country.

The shortage of doctors is one among many reasons for the rural healthcare problems of India. We surely cannot address the rural health crisis until we look into all aspects that are standing as a barrier to providing proper healthcare to the rural masses. Starting from basic facilities, to providing infrastructure, equipment, and workforce, there’s much more to be done before compelling the medicos to work in rural areas.

No wonder that the recent recommendation from the parliamentary committee caused an uproar among the medical community. The compulsory 3-year rural service could certainly put the students under a lot of pressure and might stand in the way of their career aspirations and life goals. Imagine the mental stress of the students who have to go through this compulsory rural stint leaving behind their near and dear ones! That too after spending several years of their life for medical education. Rather than motivating the medicos to take up the roles, this could certainly demotivate talented people from taking up the profession.

“Let’s not forget that all the UG medical students will only act as generalists without any insight into specialities. The real problem faced by rural India is the lack of specialists. So the decision to send inexperienced junior doctors to rural India is flawed to the core,” said Dr. Madhav Deo, former Padmashree Awardee member of the academic council of MCI, back in 2014 when the central government and the MCI reached a consensus about introducing a compulsory one-year rural stint for MBBS students.

The idea shouldn’t be to force people into rural postings but to make rural postings lucrative and inviting. For that, more funds should be allocated for rural healthcare, infrastructure has to be developed, facilities should evolve and equipment should be provided. This would certainly create a win-win situation for both the doctors and the rural masses. Remember, there’s no point in sending a soldier to the battlefield without giving him arms and ammunition!