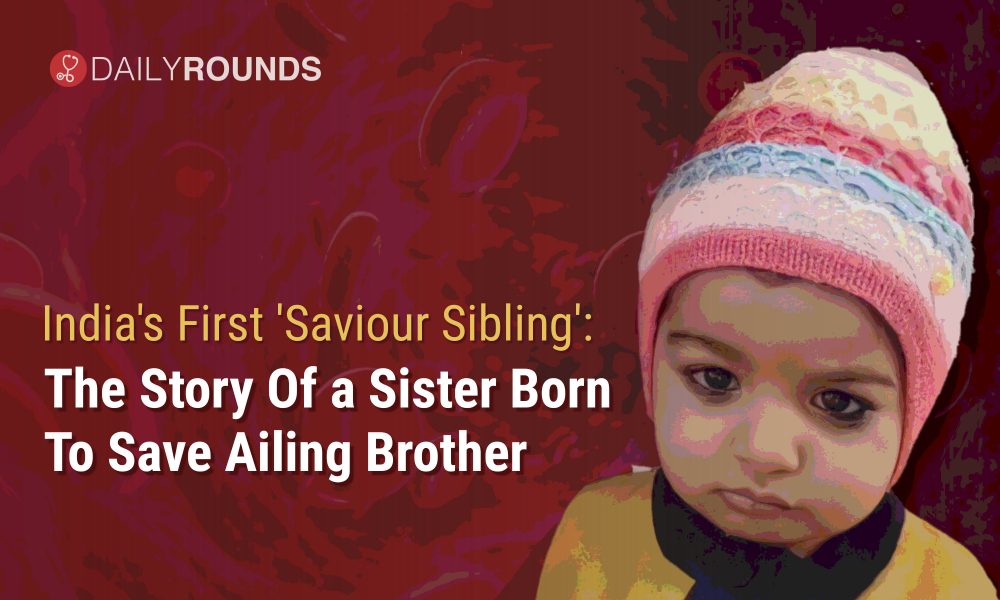 India’s First ‘Saviour Sibling’: The Story Of a Sister Born To Save Ailing Brother

In October 2018, a baby girl named Kavya Solanki was born, designed with one purpose- to save her seven-year-old brother, Abhijit’s life!

The story of India’s first ‘saviour sibling’ has made national headlines. At the same time, it has also raised questions about the ethics of using medical technology to create a child only to save or cure a sibling. Let’s put on the ‘critique shoes’ and look into it in detail.

Gujarat couple Sahdev and Aparna Solanki — both thalassemia minors — had a healthy elder daughter and a son, Abhijeet, who was diagnosed with thalassemia major when he was just a few months old. This meant he led a very poor quality life and had to take blood transfusions every three weeks. Till the age of six, he had almost 80 blood transfusions and also had to take chelation therapy to prevent excess build-up of iron in the body.

The average life span of thalassemic patients is roughly 30 years. In this case, Abhijit’s body was very weak, his immune system was compromised and he often became ill. To understand better what ailed his son, Abhijit’s father – Sahdev Solanki – began reading all the literature he could find on the disease, researching possible cures, and sought advice from medical experts.

When he heard about bone marrow transplant as being a permanent cure, he began exploring it. But the family’s human leukocyte antigen (HLA), including Abhijit’s older sister’s, wasn’t a match. Researching alternatives, the parents came across the concept of ‘saviour siblings’ and decided to go ahead with it. In simple terms, a saviour sibling is a child conceived through selective in vitro fertilization as a potential source of donor organs or cells for an existing brother or sister with a life-threatening medical condition.

Following this, Sahdev approached Dr. Manish Banker, one of India’s best-known fertility specialists, and persuaded him to prepare a thalassaemia-free foetus for Abhijit’s treatment. Dr. Banker started the assisted reproductive therapy, called pre-implantation genetic testing, for monogenic disorder with HLA matching. This method allows embryos to be screened for disease-causing genes and has been used in India for a few years now, but it’s the first time it’s been used to create a saviour sibling.

The couple underwent three cycles of IVF and as many as 18 embryos were created. Of this, only one perfectly matched Abhijeet’s HLA. The embryo was implanted in Abhijit’s mother, who delivered a healthy baby, a year ago.

“We selected 18 blastocysts through three rounds of ovarian stimulations and then biopsied them to match the recipient’s genetic make-up. Conducting Human Leukocyte Antigen Testing we found one embryo that had the perfect chromosome number and implanted that into the mother,” explained Dr. Banker.

The “genetically engineered” baby girl, Kavya, was free from the family’s hereditary disease as well as transplant-compatible with her elder brother. However, Kavya had to grow up and weigh 10 kg before she could donate cord blood or hematopoietic stem cells for transplantation to save her critically ill sibling.

Prior to the transplant, the patients received special radiation (chemotherapy) and medicines to destroy the abnormal stem and temporarily suppress the immune system so that it won’t reject the donor cells after the transplant.

Following these preparations and efforts, Abhijeet’s transplant took place in March this year, and since, Abhijeet hasn’t received a blood transfusion, indicating that he is cured of Thalassemia. His haemoglobin count was reportedly 11.3. Guess what! The little Kavya and her younger brother Abhijit are now completely healthy!

The term ‘saviour siblings’ is always debated due to the ethical concerns surrounding the procedure. While legal in the US and UK, France, Italy, and Germany have prohibited the procedure. Looking at a larger picture, as far as the donor and recipient are healthy and their well-being is maintained it shouldn’t be a big issue. However, consent becomes a major area of concern.

The child’s informed consent is indeed an issue, but it ultimately depends upon the parent’s choice as they are the guardians, according to Indian law. The first ever saviour sibling, Adam Nash was born in the US in 2000 after HLA typing for his sister Molly who was suffering from Fanconi anaemia wherein her bone marrow barely produced any blood cells. Since then, several saviour siblings were born in different parts of the world to save their ailing brother or sister.

In a 2004 paper published in the Journal of Medical Ethics which is a part of the British Medical Journal, UK researchers debated whether selecting saviour siblings should be banned.

There were several arguments to ban it, which includes:

The researchers studied these arguments. However, the paper eventually found these arguments to be flawed. “We…therefore conclude that the selection of saviour siblings should be permitted, especially given that prohibiting it would result in the preventable deaths of a number of existing children,” wrote researchers S Sheldon and S Wilkinson of Keele University, US.