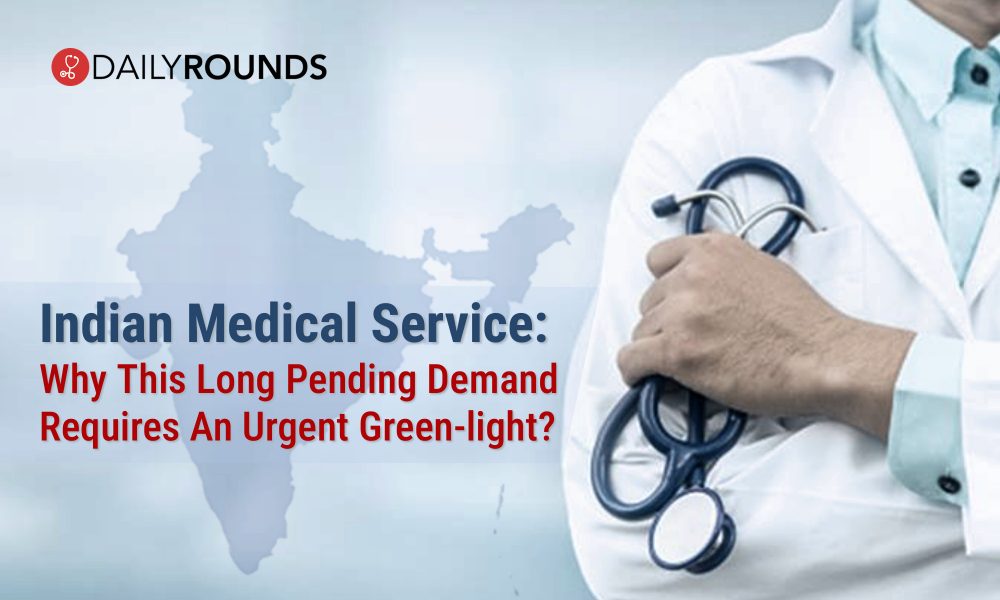 The COVID-19 Pandemic has opened up several fault lines in India’s healthcare setup. It has shown more than ever before the need for a robust and efficient public health system. It is at this point in time that the demand for an efficient, centralised medical cadre grows in importance.

The long-pending demand for Indian Medical Service (IMS), on the lines of IAS, IPS, and IFS has seen several escalations ever since the arrival of the COVID-19 pandemic. A separate cadre for medical service will place the levers of the healthcare system in the hands of those who have a basic knowledge and understanding of medical science. This, in turn, could create a drastic change in the entire health administration.

As we know, medicine is a dynamic and rapidly evolving field. Numerous studies and researches are going on in every part of the world. This makes health and its planning a particularly challenging field especially in the time of a pandemic. However, the domain could do much better with those people at the helm, who have the necessary knowledge and understanding about the subject.

The way in which a nation manages its healthcare system can certainly impact the lives of every one of its citizens in one way or the other. Moreover, as the COVID-19 pandemic has shown, in the world of the future, a robust healthcare system will play the same role in furthering the interests of a nation as played by its defence or industrial base in the past. Undoubtedly, it is one of the sectors which needs topmost priority and efficiency in management. But unfortunately in India, even the administrators at the topmost level of the Health Ministry does not possess a medical degree.

Media briefings on COVID-19 by concerned government authorities is a regular exercise during this pandemic. However, in India, it is Mr. Lav Agarwal, an IAS officer in the Ministry of Health and Family Welfare, serving as a joint secretary, who leads the government’s daily media briefings on the COVID-19 pandemic. Mr. Agarwal is not a doctor or related to the medical fraternity in any manner. In fact, he’s an engineer, graduated from IIT Delhi. Similarly, the current health secretary of India, Ms. Preeti Sudan, who has been a key strategist in times of COVID-19 pandemic is also not from the medical fraternity, but an economics graduate from the London School of Economics.

In fact, there are hardly half a dozen names with a ‘Dr.’ prefix in the entire directory of administrators listed down in the MoHFW website. They might be efficient in their own ways, but we can’t ask a pilot to sail a ship! Can we?

It is in this context that the demand for the creation of a centralised medical cadre assumes more importance than it has ever had in the past. Most of the medical associations have come forward demanding a separate cadre for doctors.

The IMA, which recently came up with the demand, feels that there is a dire need for a drastic change in health administration which can be realised by raising a new cadre of administrators.

The IMS will be responsible for holding the administrative responsibilities pertaining to the district medical officer, project officers of various disease control programmes, and the various ranks of secretaries in the Union health ministry and the State Health Departments and the heads all other areas in the health sector.

Similarly, the Resident Doctors Association (RDA) at the All India Institute of Medical Sciences (AIIMS) has also demanded setting up of ‘IMS’, which it had called as a “much-voiced need” for doctors across the country. The association also cited that this initiative will be able to bridge the gap between decision and deliverance.

The same demand was later raised by the Federation of Resident Doctors Association (FORDA). It said the coronavirus pandemic has once again stressed the need for improving the healthcare infrastructure in the nation beginning from the grassroots.

An Indian Medical Service existed in pre-independent India. Medical services were first set up in Bengal, Madras, and Bombay administrations during 1763 in order to recruit and deploy a relatively modest number of physicians and assistants to take care of the health of the military force, and officers posted in civil lines and in selected factories. In 1857, after the first war of Independence, the British government took over the direct control of these three medical services and united them into a single Indian Medical Service. This old IMS version operated on the simplistic top-down approach to healthcare rather than as a general administrator of healthcare across the country.

Ronald Ross (left) who discovered the mode of transmission of the malaria parasite and Charles Donovan who found the pathogen causing kala azar were both members of the Indian Medical Service | Photo credit: Wikimedia Commons

Creating an Indian Medical Service will also require new designs of governance and knowledge management. The professional experience and expertise of our medical personnel and health system administrators gained over the past several years could be instrumental in formulating not only the curriculum of this programme but also deciding on the nitty-gritties of how the framework is to be laid out.

Back in 2017, the union government had expressed an interest in creating the Indian Medical Service along the lines of the IAS and IPS. Following this, the health ministry had sent a circular to the states asking for their views on such a move. However, even after years, no further action has been taken with regard to the formation. IMS is the need of the hour, and it’s high time to bring this long pending demand out of the cold storage into reality. The justified demand of the medical community for this shall rise loud and strong for the sake of meeting the healthcare needs of India.

After all, “good health is true wealth.”