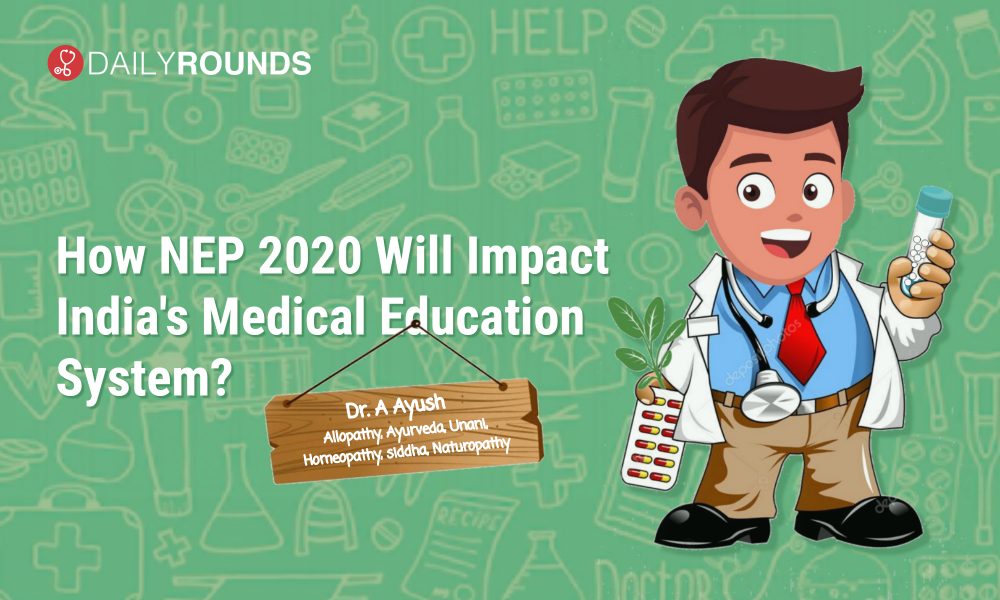 The NEP 2020 comes with a set of proposals to reform the healthcare education setup in India. “Healthcare education needs to be re-envisioned so that the duration, structure, and design of the educational programmes need to match the role requirements that graduates will play,” the policy reads.

The policy also states that the students will be assessed at regular intervals on well-defined parameters primarily required for working in primary care and secondary hospitals. This certainly shows that the reforms are intended to bring about a profound impact on the quality of healthcare delivery. In the long run, this would also come in handy in improving the quality of infrastructure for primary and secondary healthcare, particularly in rural areas.

Apart from this, the plans to integrate modern medicine with the traditional system of Ayurveda, Yoga & Naturopathy, Unani, Siddha, and Homeopathy (AYUSH) would certainly furrow the brows of few. “Given that people exercise pluralistic choices in healthcare, our healthcare education system must be integrative, meaning thereby that all students of allopathic medical education must have a basic understanding of AYUSH and vice versa”, the NEP states.

The plan has drawn mixed reactions from experts, however, the majority of the modern medical community has already raised their concerns over such a move.

When the NEP was being discussed six months ago, we had raised concerns about this point. But they have finally made it official. How can we think of making a doctor a jack of all trades and do experiments on patients? We must not intend to produce hybrid doctors as it will eventually produce official quacks.

He further added that it was the wrong policy decision and that the IMA is thinking of resending its concerns to the government.

“The move will sound the death knell for modern medicine and will create hybrid doctors. These doctors, on paper, may create quantity but will lack in quality. It will also be detrimental to our traditional Ayush systems as they will be subsumed in other systems, losing their own identity,” said Dr. Ravi Wankhedkar, former president of the SAARC Medical Association and the IMA.

Other healthcare experts cautioned that even if integration takes place, it has to be based on evidence-based science, else there would be a grave mismatch. The study of modern medicine is a complete discipline by itself. There is indeed a lot to read and learn. Is there a dire need to include these alternative medicine courses in the already vast syllabus of modern medicine? Well, it is a matter of discussion!

Apart from all these, the NEP also states that there shall be a much greater emphasis on preventive healthcare and community medicine in all forms of healthcare education. Seems like the nation has learned a lesson or two from the ongoing pandemic.

Earlier in 2019, the Draft NEP of around 484 pages was thrown open to the public for feedback. However, the majority of doctors were sceptical about the draft, with several people from the medical fraternity even taking to protest against some of the DNEP proposals. The final NEP 2020 is a much shorter version that intends to overhaul the existing education system by making certain paradigmatic changes. However, most of the core points mentioned in the earlier draft were found missing in the final version, which includes proposals for:

However, the recommendation of DNEP to make National Exit Test (Next) mandatory for entrance into PG medical courses was considered as one of the biggest flaws in the draft by the community back then. The proposal was suspected to shift the focus of students from learning the wider aspects of medical education and restrict their undergraduate education to solely clearing the final year exit examination.

• Pluralistic healthcare education and delivery: The ‘medical pluralism’ promoted by the draft NEP through ‘bridge courses’ also came under heavy criticism. According to the proposals, all science graduates will be studying a common foundational course designed uniformly for all branches in the first year. They can then take up specializations of their choice such as MBBS, BDS, and nursing. However, this recommendation also received heavy criticism from the medical fraternity as it was expected to produce sub-standard doctors and lead to quackery and dilution of modern medical education.

• Increasing the intake of students in healthcare education: The draft NEP also had plans to upgrade the 600 or so district hospitals in the country to teaching hospitals at the earliest by investing in infrastructure for targeted medical specialities and in stationing adequately qualified teaching faculty. However, there’s no mention regarding this in the final proposal.

• Expanding post-graduate education: There is a shortfall in the number of seats in postgraduate courses in many disciplines, particularly in medical education where the number of seats in postgraduate education is only approximately half the number of MBBS seats. Taking this into consideration, the draft NEP proposed to increase these seats as quickly as the available infrastructure in hospitals around the country allows. The plan was to start new post-graduate courses in medical colleges and hospitals that have an adequate number of patients and well-trained teaching faculty and to move the district hospitals towards having a medical college attached to them. However, all of these proposals remained in the earlier draft and failed to find a space in the recently published policy.

The NEP 2020 is only a policy, not a law; implementation of its proposals depends on further regulations by both States and the Centre as education is a concurrent subject. Though the policy seeks to bring a holistic change in the education system of India, its success depends on the will and way in which it will be implemented.