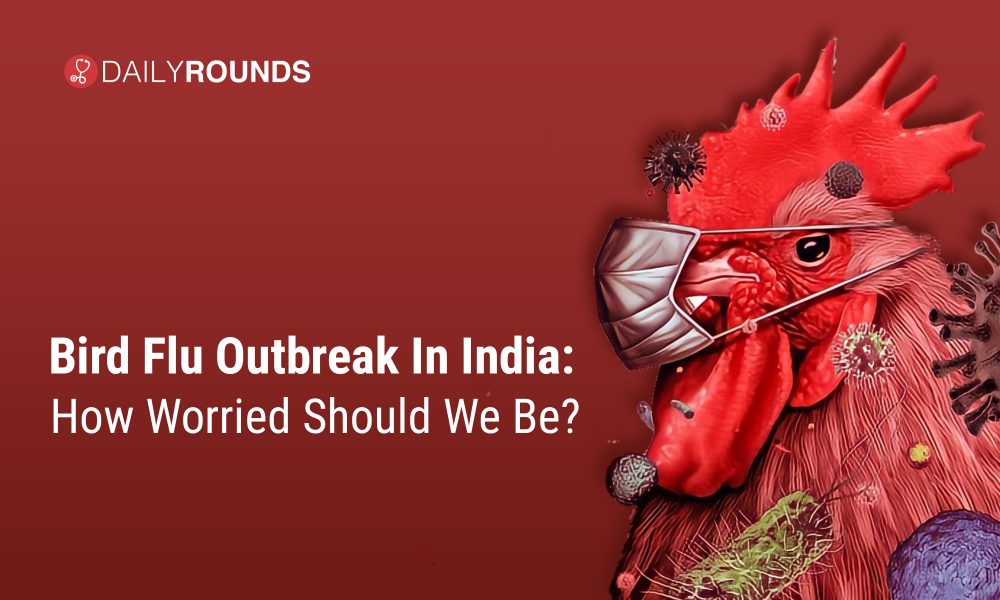 Bird Flu Outbreak In India: How Worried Should We Be?

At a time when the threat of the COVID-19 pandemic felt as if it was slowly coming to an end, another outbreak has hit the shores of India and has heightened the fears. Several states across the country are now scrambling to contain yet another outbreak in the form of bird flu/Avian influenza, including Kerala, Rajasthan, Madhya Pradesh, Haryana, Himachal Pradesh, Delhi and Maharashtra.

Bird Flu is a word that is not new to Indians anymore, thanks to frequent outbreaks ever since the infection surfaced over a decade ago. While the first bird flu cases were reported majorly in 2006 and India declared itself free of bird flu in September 2019, the country today is again amidst a bird flu outbreak where several states have reported positive cases along with thousands of birds dying from it. So, what is this infection and how does it spread? What are the symptoms, treatment and precautions? Moreover, should we be worried? Let’s take a look:

What is Avian influenza or Bird flu?

Bird flu refers to the disease caused by infection with avian influenza Type A viruses. These viruses occur naturally among wild aquatic birds worldwide and can infect domestic poultry and other bird and animal species. Avian flu viruses do not normally infect humans. However, sporadic human infections with avian flu viruses have occurred. It was first detected in 1996 in geese in China. In India, the first cases were reported in Maharashtra in 2006.

How does it spread?

Migratory aquatic birds are carriers of Influenza A viruses and shed it in their droppings. Infected birds also have the virus in their saliva and mucous. This is how it spreads to other birds, and, occasionally, to mammals such as pigs, horses, cats and dogs.

Although avian influenza A viruses usually do not infect people, rare cases of human infection with these viruses have been reported. Human infections with bird flu viruses can happen when enough virus gets into a person’s eyes, nose or mouth, or is inhaled.

Rare human infections with some avian viruses have occurred most often after unprotected contact with infected birds or surfaces contaminated with avian influenza viruses. However, some infections have been identified where direct contact was not known to have occurred. Illness in people has ranged from mild to severe.

The spread of avian influenza A viruses from one ill person to another has been reported very rarely, and when reported it has been limited, inefficient and not sustained. However, because of the possibility that avian influenza A viruses could change and gain the ability to spread easily between people, monitoring for human infection and person-to-person spread is extremely important from a public health perspective.

When and how did it begin affecting humans?

Bird flu outbreaks have been affecting poultry around the globe for decades. But it was in 1997 when humans are first known to have contracted bird flu following an outbreak in a live bird market in Hong Kong. This was the deadly H5N1 strain of the virus. Subsequently, several other strains of the virus such as H5N2 and H9N2 spread from animals to humans.

After the initial outbreak, it was contained, but re-emerged a few years later in various other parts of the globe and caused hundreds of human deaths, particularly in Southeast Asia. Between 2003 and 2014, the World Health Organisation recorded 701 cases of H5N1 and 407 deaths among humans.

Signs and Symptoms of Bird flu in humans

The situation in India

However, the data indicated that India did not report any transmission case in humans so far. While this may sound a bit relieving, one cannot completely rule out the possibility of it going forward. This influenza also has many strains with H5N1, H7N9, and H9N2 being highly pathogenic and easily transmissible to humans. In India, a majority of the avian influenza cases reported have been due to the  H5N1 strain. Therefore, it is better to take the necessary precautions. If the virus mutates to more virulent forms, there is certainly a possibility for another public health crisis to occur.

Following the outbreak, the Centre has asked all state governments to stay on alert and keep the primary focus on culling these birds. Officials at animal husbandry have been alerted to maintain strict measures near water bodies, zoos as well as poultry farms. Anyone dealing in poultry rearing, culling, and collecting dead birds have been asked to use PPE kits. It has also issued a testing advisory to states, encouraging them to undertake screening and ensure suitable biosecure facilities. At many places, local authorities have put poultry supply on hold for some time.

Meanwhile, people have been scared to consume any poultry products. To this, officials have asked people to ensure that they should consume chicken and eggs when it’s fully cooked (at or above 70°C) as the virus will not be able to sustain high temperatures.

The term ‘Bird flu’ may not sound that dangerous, but it is indeed a cause of real concern especially during the time of a pandemic. According to data, around 6 out of 10 confirmed cases of H5N1 among humans have led to deaths (though the actual mortality rate may be lower due to under-reporting of asymptomatic cases). So the situation clearly demands close monitoring and adherence to safety measures. Remember, if the virus mutates and becomes easily transmissible it can potentially cause yet another pandemic!