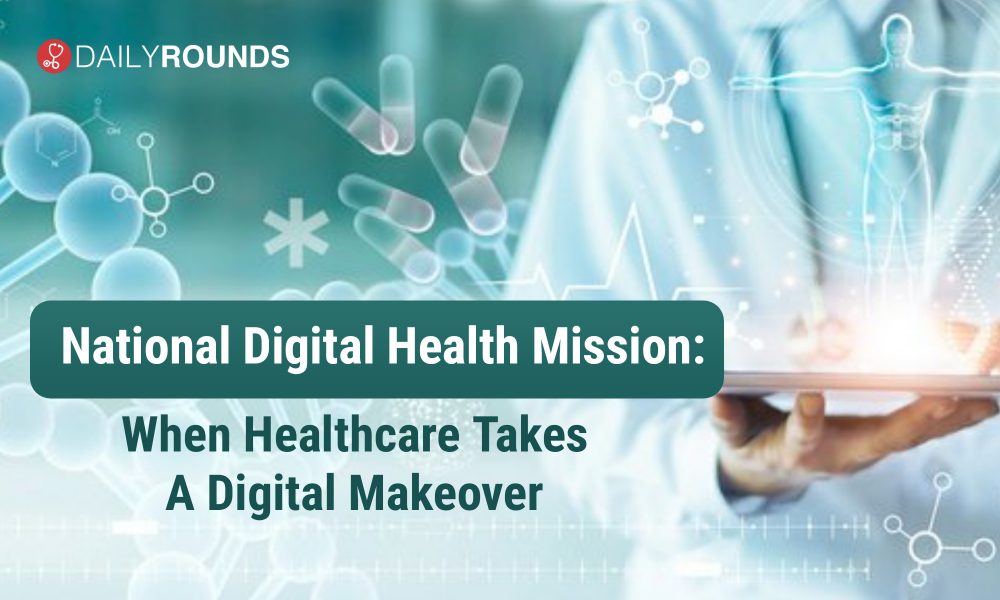 On the occasion of the 74th anniversary of India’s Independence, Prime Minister Narendra Modi announced the launch of the National Digital Health Mission (NDHM), a flagship programme that would provide a new landscape for the entire healthcare system in the country.

The ambitious National Digital Health Mission finds its roots in a 2018 Niti Aayog proposal to create a centralised mechanism to uniquely identify every participating user in the National Health Stack. The National Health Authority (NHA), the apex agency responsible for the implementation of Ayushman Bharat Pradhan Mantri Jan Arogya Yojana (AB PM-JAY), has been given the mandate by the government to design, build, roll-out and implement the NDHM with an aim to improve the efficiency, effectiveness, and transparency of health services in the country.

In his Independence Day address from the ramparts of Red Fort, the Prime Minister said that the mission will herald a new revolution in the health sector. Let’s have a look at the mission in detail as the healthcare sector in the country is all set for a digital makeover.

What is National Digital Health Mission?

The National Digital Health Mission is a holistic, voluntary healthcare programme that will reduce the existing gap between various stakeholders such as doctors, hospitals, and other healthcare providers, pharmacies, insurance companies, and citizens by bringing them together and connecting them in integrated digital health infrastructure.

The NDHM comprises five key components that include- Health ID, Patient Health Record, Electronic Medical Record, Digi Doctor Platform, and Health Facility Registry. At a later stage, it will also include e-pharmacy and telemedicine services, regulatory guidelines for which are being framed.

As per NHA, every patient who wishes to have their health records available digitally must start by creating a unique Health ID. The Health ID will be a repository of all health-related information of an individual. Each Health ID will be linked to a health data consent manager, such as NDHM, which will be used to seek the patient’s consent and allow for a seamless flow of health information from the Personal Health Records module.

The ID is to be created by using a person’s basic details and mobile number or Aadhaar number. This will be used for the purposes of uniquely identifying persons, authenticating them, and threading their health records (only with the informed consent of the patient) across multiple systems and stakeholders. However, the ID’s which will be applicable across states, hospitals, diagnostic laboratories, and pharmacies won’t be mandatory. Although, the authorities hope that the feature will attract more users to it since it allows a person online access to all their health records right from birth.

Apart from this, the government has also assured that the data provided will be protected and health records will only be shared after authorisation by an individual.

A PHR is an electronic record of health-related information on an individual that can be drawn from multiple sources while being managed, shared, and controlled by the individual. The functions that are supported by a Personal Health Record-System (PHR) are those that enable an individual to manage information about his or her healthcare. The principal users of these functions are expected to be individuals referenced as account holders; the patient or subject of care and healthcare providers will have access to certain functions to view, update or make corrections to their Personal Health Record.

An EMR is best understood as a digital version of a patient’s chart. It contains the patient’s medical and treatment history from a SINGLE health facility. EMRs allows physicians to:

The general approach is to create a web application that operates on a set of standards like the data construct, interoperability standards, and standard medical terminologies. The EMR envisages to be a comprehensive view of the patient’s Health Information at a given facility.

A single, updated repository of all doctors enrolled in the nation with all the relevant details of the doctors such as name, qualifications, name of the institutions of qualifications, specializations, registration number with State medical councils, years of experience, etc. The doctor’s directory would be an essential building block of the digital health infrastructure of the country. The directory will be designed to be kept up-to-date as doctors gain skills via fellowships and map them to the facilities they are associated with.

The Health Facility Registry is a single repository of all the health facilities in the country. The registry would be centrally maintained and would also facilitate the exchange of standardized data of both public and private health facilities in the country. The registry will allow health facilities to access their profile and update it periodically with specialties and services they offer, as well as provide a secure common platform to the facilities to maintain all essential information. Facilities will be able to e-sign documents such as patient records, apply for empanelment, have easier claims processing, as well as improve access to all healthcare ecosystem elements.

Apart from all this, the strategy document mentions that in the upcoming stages, plans are afoot to bring under the fold of NDHM e-pharmacies and telemedicine services, a step that would have widespread impact on India’s healthcare domain. As per the recent report by the Center for Disease Dynamics Economics & Policy (CDDEP) in the US, India is facing a shortage of 600,000 doctors. The country’s doctor-patient ratio at 1:1456 is way below the WHO-stipulated limit of 1:1000. However, the government’s renewed push to telemedicine and e-pharmacy will take quality care to the masses, ensuring inclusivity and equality in healthcare.

Patients from small towns and cities could be able to consult experienced doctors and avail quality low-cost generic medicines. The technological intervention will bridge the urban-rural healthcare divide that still exists.

Cutting down the cost of healthcare is yet another target of NDHM. Technology will play a definitive and pivotal role in plugging unnecessary gaps and help make healthcare affordable in the country. For instance, the digitization effort will save patients from travelling far and wide just to see a physician and also reduce the burden of getting the same diagnostic tests done multiple times.

Few days after the official announcement, the NDHM has been rolled out on a pilot mode in six union territories in the country, which includes- Chandigarh, Ladakh, Dadra and Nagar Haveli, Daman and Diu, Puducherry, Andaman and Nicobar Islands and Lakshadweep. Based on the initial learnings from these union territories, the Centre is planning to extend the mission to other parts of the country through a partnership with the state governments.

The challenges in front!

The government has laid down the ambitious digital roadmap for Indian healthcare with the digital health mission.  However, adopting and implementing the NDHM will definitely have its share of challenges. Even though the technology-based initiative is a potential game-changer, it is expected to face a lot of hurdles, especially when it comes to rural India. The low internet penetration and accessibility of digital records are particular concerns in rural areas.

Another important concern is regarding data security and privacy. However, to address this, the Centre is planning to develop a National Policy on Security of Health Systems and Privacy of Personal Health Records, in accordance with the Personal Data Protection Bill of 2019.

Even then, considering that the mission involves government collaboration between hospitals in both public as well as private sectors, laboratories, insurance firms, pharmacies, and telemedicine, there is a risk of exposing individual healthcare data to hacking and commercial misuse. Although the NDHM is now a voluntary exercise, like the Aadhaar was at the outset, it could become mandatory for availing government health services. In such a context, ensuring the safety of individual health data becomes paramount. There should be more clarity on questions regarding personal data protection and privacy.

When it comes to electronic health records (EHR), a 2018 report by the Ministry of electronics and information technology, titled “Adoption of EHR: A Roadmap for India“, had highlighted the shortage of basic needs to implement the system. The report said government hospitals and dispensaries had limited information and communications technology infrastructure with only a few major public hospitals having computers and connectivity. The condition remains the same even after two years, leading to yet another challenge in front of NDHM.

The response of the Medical Community!

The Digital Health Mission has evoked mixed feelings among the medical community. While some believe that the mission would bring about a revolution in the healthcare arena some others argue that it is a waste of money and resources. The Indian Medical Association (IMA), however, belongs to the latter category, as it already raised a red flag over the mission.

The IMA officials shared serious concerns about the confidentiality and privacy of the health data while calling the initiative an “absolutely unnecessary” exercise. The top medical association also questioned the utility of NDHM. “In our view, it is a hyped programme and does not serve a purpose to the patients,” said Dr. R V Asokan, Secretary-General, IMA. “The government reasons that they need to take surveys and collect data for various health programmes as they do through the National Family Health Survey. Nevertheless, this cannot be a reason to get hands-on public health data on such a large scale. I doubt whether the purpose of the programme is only digitalization,” he further added.

A lot of questions have to be answered and a lot of concerns have to be addressed before we move any step forward with the digital mission. Utmost importance and care should be given in all aspects relating to the initiative as it deals with highly sensitive entities such as health data.

The nation can also learn lessons from the experiences of other countries in implementing similar projects. In 2005, the UK’s National Health Service (NHS) started deployment of an electronic health record systems with a goal to have all patients with a centralised electronic health record by 2010. While several hospitals acquired electronic patient records systems as part of this process, there was no national healthcare information exchange. The program was ultimately dismantled after a cost to the UK taxpayer was more than £12 billion, and is considered one of the most expensive healthcare IT failures.

What it shows is that it takes a lot of effort, planning, and execution to take the mission from papers to reality. The government must leave no stones unturned in its efforts to achieve the goal, which would certainly mark a new milestone in the history of Indian Healthcare.